Lesson 1 - The Ancien Régime – Switzerland before 1789
Switzerland is often considered to be one of the oldest democracies in the world. Apart from not giving all women the right to vote until 1971 in federal elections (1991 for the last canton), there is plenty of other evidence to illustrate that Switzerland’s historic democratic credentials are largely a myth.
Before 1798, Switzerland’s social and political system was characterised by the domination of a ruling, aristocratic class that was not dissimilar to pre-revolutionary France.  As we have seen earlier this year, following the Peace of Westphalia in 1648 (which granted Swiss independence from the Holy Roman Empire) most European powers began a process of modernisation and centralisation of the political system. This did not happen in Switzerland, in part because she did not feel the need to, but also because her independence was much appreciated by other European powers. Swiss cantons provided mercenary soldiers to other European powers until the 19th century and in return the cantons received significant wealth and a recognised neutrality that was in everyone’s interest. So, despite deep internal divisions (notably between Catholic and Protestants), Switzerland gained a reputation for wealth and stability.
Switzerland before the French Revolution was a set of largely feudal states dominated by powerful oligarchies drawn from regionally important families. In fact, from the 17th century political representation became increasingly narrow, as important political positions were passed on from father to son, which had not been the case in previous centuries. Gradually, over time, individual rights and popular political participation declined as increasingly powerful families became absolute rulers.

​Nor were all areas of the Old Swiss Confederacy equal. There were only 13 independent cantons, which along with Associate cantons, controlled vast areas of what would become modern-day Switzerland.  For example, citizens of French speaking Vaud (which will play an important role in the 1798 revolution) had been under the control of German speaking Berne since the 16th century and its citizens enjoyed no political rights. 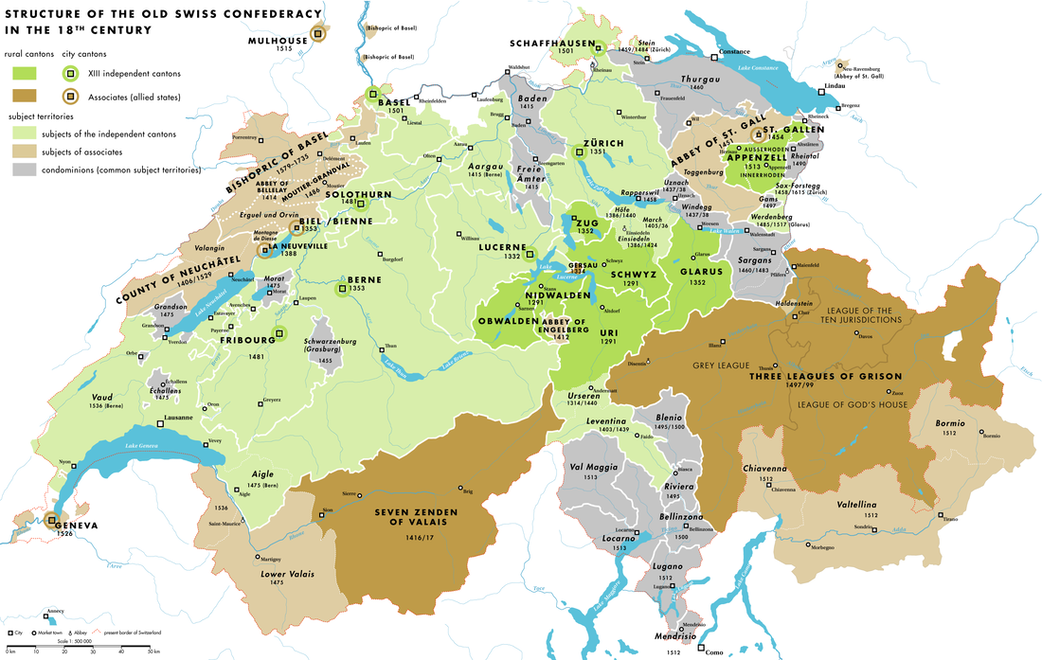 The impact of the Enlightenment.

As in France, the political system in Switzerland came under increasing pressure for change throughout the 18th century, largely as a result of significant external forces. As we have seen, the Age of Enlightenment spread a range of new ideas about how society and government should work. Voltaire (who wrote Candide in Switzerland) and especially Geneva born Jean Jacques Rousseau, exercised considerable influence in Switzerland.  Swiss society was becoming increasingly tolerant, executions for heresy and witchcraft stopped and the penal use of torture was increasingly criticised. The French Encyclopédie was published in Yverdon in the 1770s and Geneva, Lausanne and Neuchatel became important publishing centres that attracted intellectuals from all over Europe.
Activities

​​1. Explain how the Swiss cantons had acquired a reputation for wealth and stability.
2. Why is the idea of a long history of Swiss democracy largely a myth? Provide a selection of examples in your answer.
3. Explain how the Enlightenment and Industrial Revolution began to transform Switzerland in the 18th century.
4. Who was Major Davel? Why do you think there is a statue to him in Lausanne?
5. Why was Balthasar's 'Patriotic Dreams' important?