Lesson 4 - Switzerland 1815 – 1847 ‘Restoration’ , ‘Regeneration’ and civil war
As in much of Western Europe, post-Napoleonic Swiss history follows patterns that are divided by the landmark dates of 1830 and 1848. Some of the structural pressures were also similar. Switzerland’s industrial growth was one of the most advanced in Europe and began to transform the country economically and socially. Political liberalism that demanded constitutional and representative government and a final end to restrictive feudal laws, continued to grow in influence. And Swiss nationalism, which was first important in the period before 1798, continued to spread out from the educated classes to all sectors of society.

This historic time in Swiss history is traditionally divided into two periods: ‘Restoration’ refers to the period of 1814 to 1830 and the attempts to the restore the Swiss Ancien Régime (and cantonal authority) which reversed the changes imposed by centralist Helvetic Republic from 1798 and Napoleon’s compromise Act of Mediation of 1803. ‘Regeneration’ refers to the period of 1830 to 1848, when in the wake of the July Revolution in Paris, the Ancien Régime was challenged by the liberal and nationalist movement.

And yet although Swiss history appears to resemble wider European patterns at this time, there was something distinctly Swiss about the whole process of change. The forces of conservatism were not a simply a feudal class of landowning aristocrats clinging on to feudal traditions that supported a traditional way of life. In Switzerland there was a regional and religious dimension to the opposition to change that resulted in particularly deep divisions. There were to be revolutions all across Europe in this period, but only Switzerland had in 1847 a genuine civil war.

As we have seen, the old elite ‘patricians’ and many of the ruling families returned to power as a result of decisions made at the Congress of Vienna. Switzerland was forced into supporting the Holy Alliance and this resulted in restrictions on the freedom of the press and an end to Swiss toleration of political refugees. However, almost from the beginning, the restored regimes faced challenges from reformers. As early as 1816, an economic depression caused by the return of Britain’s modern textiles industries to European markets, made life difficult for the Swiss traditional hand-loom worker. In addition, the Restoration regimes had reintroduced cantonal tolls and customs and restricted freedom of movement, all of which damaged trade. The opposition demanded political and economic reform. The Vaudois liberal Benjamin Constant (lover and protégé of Germaine de Staël) wrote influential texts calling for constitutional reform to follow the English model that were inspirational to liberals throughout Europe.
Nationalists inspired by the success of the federal army called for more national institutions to be created. The Helvetic Society was revived and played a more political role. The example of the Greek independence movement inspired romantic nationalists in Switzerland as throughout Europe.

Although the Swiss movement for political reform predated the 1830 revolutions in Europe – successful pressure and petitioning for constitutional reform had resulted in limited reform in Lucerne and Schaffhausen and significant changes in Ticino – the July revolution in Paris was a catalyst for countrywide change. Faced with countrywide demonstrations the Diet recognised the right of cantons to change their constitutions and almost all did so. Historically this is known as the ‘Regeneration’.
The Basel authorities tried to break up the assembly by force but were beaten off in August 1831.  The federal Diet sent soldiers to keep the two sides apart and allowed the creation of two half-cantons. The city finally accepted this division in August 1833, but only after suffering a series of military defeats in the preceding two years. A similar conflict also required federal intervention in Schwyz.

As well as divisions within cantons, there were also divisions between reformers. Many liberals were happy with the changes that had been implemented, but others wanted to go still further. Contemporaneous with the Chartist movement in Britain, these ‘advanced liberals’ or freisinnige radicals argued for the introduction of direct democracy and universal male suffrage, often as a means to improve living standards. In Switzerland, there was also an additional religious dimension, which saw the radicals calling for educational reforms intended to weaken the power of the Church. It was this religious conflict and strident and ultimately armed Catholic opposition to reform, which would ultimately push the Swiss cantons into civil war.
Activities

As in the rest of Europe, what brought the underlying religious tensions to the surface was the economic depression of the 1840s. The Swiss economy had undergone significant change in the previous generation. Textile manufacture, machine tools and chemicals had grown so that one quarter of all Swiss now worked in manufacturing. But in the 1840s these industries were hit by recession. The economic slump created social problems with which the new industrial society struggled to cope. Socio-economic discontent fuelled a desire for a political response which inevitably brought to the surface polarising religious divisions.

In 1834, six regenerated liberal cantons agreed to the Articles of Baden which set new rules for seminaries (schools for priests), marriages and feast days which were strongly opposed by conservative Swiss Catholicism. In 1837 in Zurich, peasants marched against the liberal government and after 14 people were killed an anti-radical government was put in place. Joseph Leu of Ebersoll in Lucerne led Catholic activists in the struggle against radicalism, founding the Catholic Brotherhood to defend Catholic control of education and to allow Jesuits (Catholic missionaries) into Swiss education. Catholic conservatives also fought against radical reforms in Valais and Ticino.

In 1841, Augustin Keller a liberal, initiated the rewriting of the cantonal constitution of Aargau which weakened the position of Catholics. The pro-Catholic demonstrations and anti-Catholic government retaliation led the Catholic leadership to begin discussions about organising themselves militarily.  In Valais, conservatives introduced a new constitution which excluded French speakers and banned Protestantism. In 1843, Josef Leu recalled Jesuits to Lucerne. 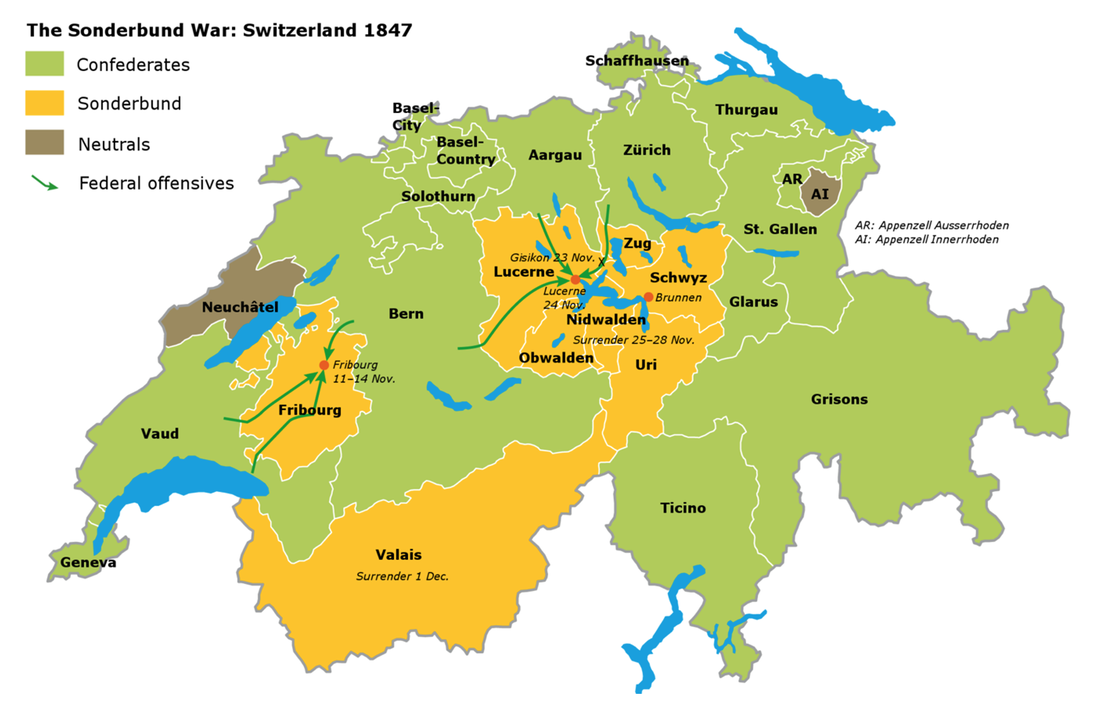 The first major offensive took place in Fribourg in November which surrendered to the federal forces with little resistance. There was more significant resistance in Lucerne but the city also fell on November 27th. The other Sonderbund cantons surrendered and by the November 29th and after just 27 days, the war was over.  In all, 130 soldiers had been killed. The 20 million francs cost of the war was paid by the Sonderbund cantons and Neuchâtel and Appenzell Innerrhoden were also fined for not providing troops to the federal army. This was to the last armed conflict on Swiss territory until today.
As in the USA the Federal Assembly was divided between an upper house (the Council of States, two representatives per canton) and a lower house (the National Council, with representatives elected from across the country). One of the first acts of the Assembly was to choose Berne as the federal capital. Referendums were made mandatory for any amendment of this constitution. This new constitution also brought a legal end to nobility in Switzerland. 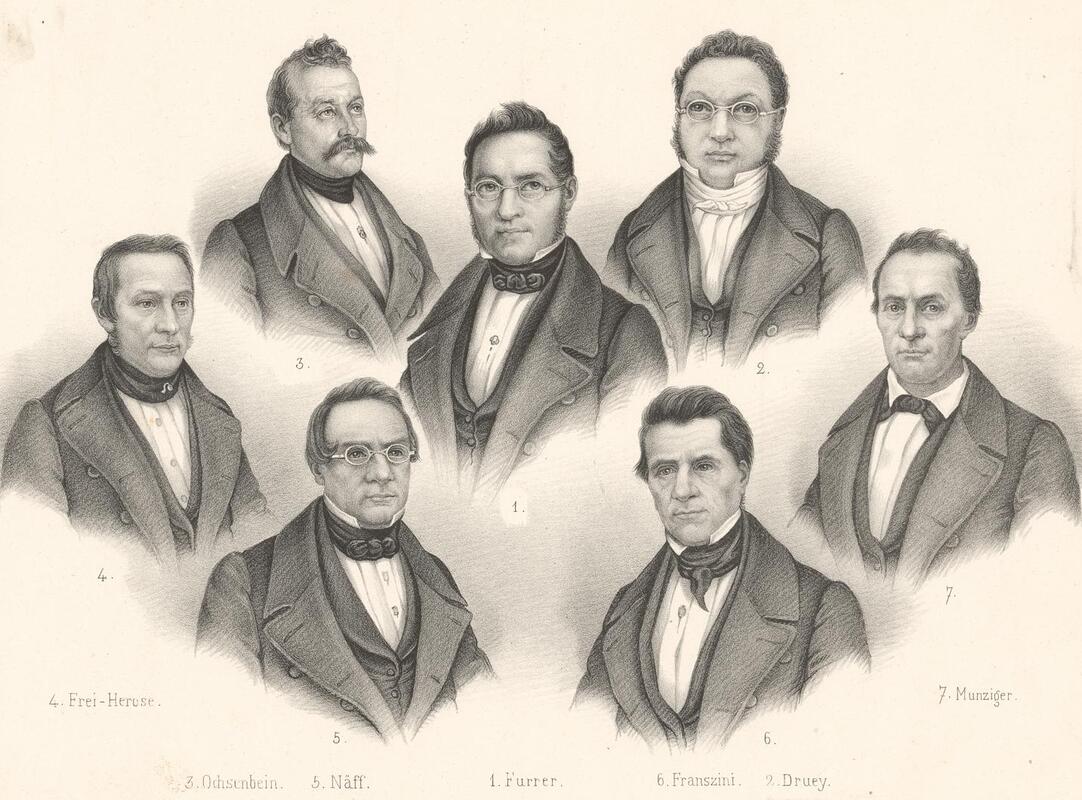 A system of single weights and measures was introduced, in 1849 a federal postal service was introduced and in 1850 the Swiss franc became the Swiss single currency. A federal university and a polytechnic school were to be founded. The Swiss railway line was opened in 1847, connecting Zürich and Baden. In 1854 roads and canals were taken under federal control. Article 11 of the constitution forbade sending troops to serve abroad, with the exception of serving the Holy See in Rome. All Christians were guaranteed the exercise of their religion, but the Jesuits were expelled from Switzerland and this ban was only lifted on 20 May 1973. The constitutional basis for the modern Swiss state was in place.
Activities

​3. Explain the causes of the Sonderbund war. It is important that you explain the economic context and the actions of both Catholics and Radicals.
4. Outline the main features of the Sonderbund War.
5. Summarise the main characteristics of the Swiss Federal Constitution of 1848.
More recently, RTS also produced a relatively big-budget, drama-documentary called the Swiss Civil War. ​