Lesson 5 - How do modern authoritarian states gain support from policies and what do they aim to achieve ? Case study Mussolini
On the traditional conservative right, Mussolini generally did far more to accommodate and co-opt important influences like the catholic church, big business and the great landowners. In 1922, a law was introduced to split the large estates and redistribute the land, but this was never acted on. Agricultural wages dropped by more than 30 per cent during the 1930s. Industrialists benefitted from the Vidoni Pact of 1925 and the Charter of Labour of 1927 that increased the power and freedom of employers. United in their opposition to socialism and organised labour, traditional conservatism welcomed the weakening of the working-class organisations (Trade Unions were effectively banned in 1925-6) and support that fascism gave to traditional conservative social policies that limited women’s rights or cultural policies which saw the increased influence of the Catholic Church. (See social and cultural policies below). The lower middle classes who entered the administrative bureaucracy of the growing state or the Fascist Party enjoyed relative prosperity, with good wages and considerable benefits, as well as the opportunity to increase their income through corrupt means.  ​
Economic Policies

Historians disagree on whether there was a distinctive fascist economic policy. Fascism’s anti-intellectualism and embrace of pragmatic realpolitik meant that fascist leaders expected the economy to serve nationalist and imperialist goals.  If there was a distinctive Fascist economic policy, it was that Italy should become economically self- sufficient in both food and in raw materials for industry. This policy is known as autarky and is something that Hitler also encouraged in Germany. Although this goal was consistent, policies were inevitably influenced and divided by before and after the Great Depression.

In the 1920s Mussolini launched a series of bold and ambitious, state led campaigns or ‘battles’: in 1924 the Battle over the Southern Problem; in 1925 the Battle for Grain; in 1926, the Battle for Land and the Battle for the Lira. The results were inevitably mixed. Focusing resources on one problem often resulted in unexpected consequences or problems for those areas neglected by state intervention. Although the Battle for Grain succeeded in almost doubling cereal production by 1939, making Italy self-sufficient in wheat, it also involved misallocation of resources. This resulted in Italy having to import olive oil, while exports of fruit and wine, and numbers of cattle and sheep, dropped. The Battle for the Lira, which involved artificially raising the value of the lira, also resulted in declining exports — and thus increased unemployment — as Italian goods became more expensive.
Social Policies

The promises that had been made about the corporate state failed to materialise. Instead of ending class conflict, Mussolini’s fascist state merely prevented workers from defending their interests, while employers were able to manage their companies without either interference from the state or opposition from their employees. For example, as the economy began to decline in the second half of the 1920s, employers ended the eight-hour day and extended the working week. At the same time, wages were cut — from 1925 to 1938, the level of real wages dropped by over 10 per cent. Workers were afraid of protesting about their working conditions in case they lost their jobs altogether. Some social welfare legislation was passed in the fascist era, including the introduction of old-age pensions and unemployment and health insurance. There was also a significant increase in education expenditure. However, these improvements did not make up for the loss of wages and poor working conditions experienced by many. Mussolini’s policies clearly benefited large landowners rather than small farmers and agricultural labourers. In an attempt to escape rural poverty, many Italians emigrated. Over 200,000 Italians moved to the USA in the period 1920—29.  ​
(ii)  The Church, racism and anti-Semitism
​
The Catholic hierarchy was particularly pleased by the fascists’ defeat of the socialists and communists and saw benefits in ending the conflict between Church and state. The real breakthrough, however, came in 1929, following a series of secret negotiations between the fascists and Cardinal Gasparri, a senior Vatican official. These negotiations resulted in three Lateran Agreements, which finally ended the conflict and bitterness that had existed between the papacy and the Italian state since 1870. By the terms of the Lateran Treaty, the government accepted papal sovereignty over Vatican City, which became an independent state.
While neither explicit racism nor anti-Semitism were characteristics of the early fascist movement, there was a general racist attitude underlying the fascists’ nationalism and their plans for imperialist expansion. Racism was also a strong element in the Romanita movement Mussolini believed that the Italian‘race’ was superior to those African ‘races’ in Libya and Abyssinia. In September 1938, in the newspaper II Giornale d’Italia, Mussolini claimed that ‘prestige’ was needed to maintain an empire. This, he said, required a clear ‘racial consciousness’ that established ideas of racial ‘superiority’.
​
Until 1936, when Mussolini joined Nazi Germany in the alliance known as the Rome—Berlin Axis, (see below) anti-Semitism had not played a part in fascist politics.  Mussolini’s move towards anti-Semitism was signalled in July 1938 by the issue of the ten-point Charter of Race, which was drawn up by Mussolini and ten fascist ‘professors’. The charter was followed by a series of racial laws and decrees, initiated between September and November 1938. These anti-Semitic laws excluded Jewish children and teachers from all state schools, banned Jews from marrying non-Jews, and prevented Jews from owning large companies or landed estates. The laws also expelled foreign Jews, including those who had been granted citizenship after 1919 These laws were never fully implemented in the period 1938—43, mainly because at a local level they were largely ignored by many Italians. However, they were strongly and publicly opposed by the pope. As well as the Catholic leadership, several senior fascists were unhappy about the introduction of these racial laws.
​The fascists also tried to indoctrinate young people by setting up youth organisations. In 1926, all fascist youth groups were made part of the Opera Nazionale Balilla (ONB). Within the organisation were different sections for boys and girls, according to age. For boys, there were the Sons of the She-Wolf (4—8), the Balilla (8—14) and the Avanguardisti (14—18). For girls, there were the Piccole Italiane and the Giovani Italiane. There was also the Young Fascists for boys aged 18—21, after which they could apply to become members of the Fascist Party.  By 1937, the ONB’s membership had risen to over 7 million. While all groups followed physical fitness programmes and attended summer camps that included pre-military training, older children also received political indoctrination.
Nowhere better was this illustrated than in the war memorial at Redipuglia (see earlier documentary David Reynolds Long Shadow)  Redipuglia is excessive and grand; partly because it can be, and partly because excess and size make a statement. Just like Albert Speer's New Reich Chancellery in Hitler’s Berlin or any number of the gigantic monuments to the memory of Kim Il-Sung in North Korea, the overwhelming size and purposefully imposing style is intended to inspire awe and fear in equal measure. The weakness of the individual against the power of the authoritarian state is the only message that matters.

​(Above) a selection of fascist era architecture still standing in Italy today. (Below) Modernism and Romanita,  The Palazzo della Civiltà Italiana, also known as the Palace of Italian Civilization or simply the Colosseo Quadrato, was completed in 1937. Designed for 1942 World Fair, which was planned to be held in Rome. 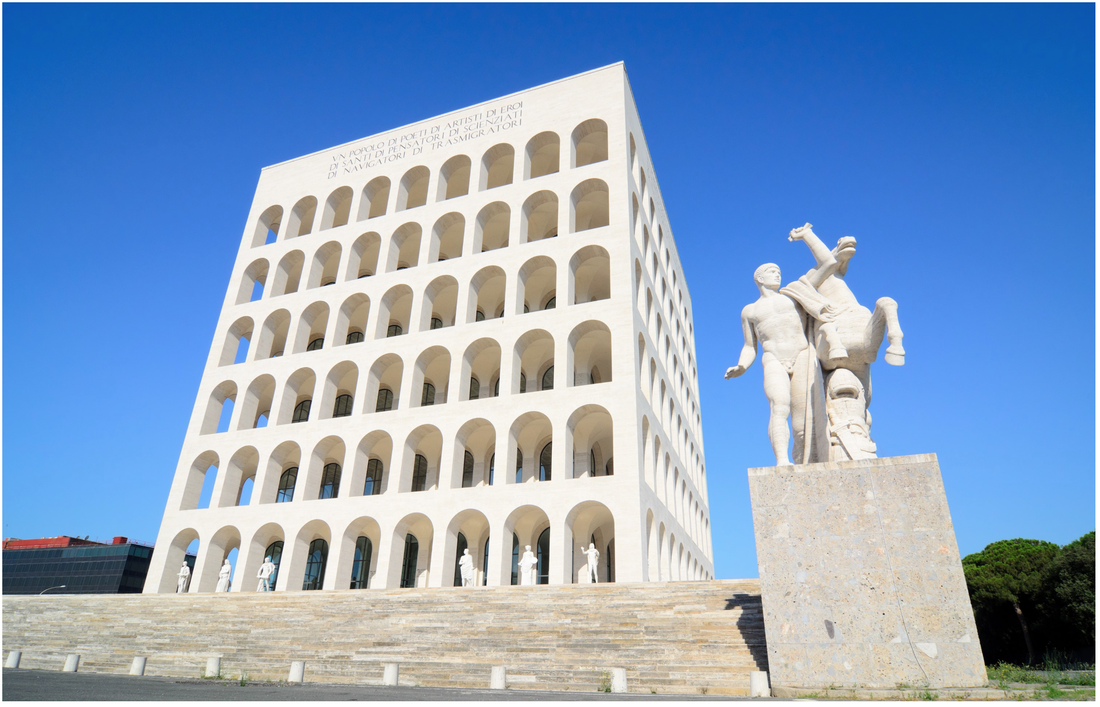 ​From 1922 to 1943, over 700 films were produced in Italy, almost all concerned with entertainment. Although there was not the same attempt to control cinema as existed in Germany or Russia, Mussolini's son Vittorio did play a major role in the Italian film industry founding a major film school, the Centro Sperimentale di Cinematografia (1935); and one of the world's great film production complexes, Cinecittà, inaugurated by Mussolini in 1937. But in general Mussolini's government relied on radio and short filmed documentaries prepared by LUCE (the Union of Cinematographic Education) and screened with the feature films designed for entertainment.
Opera Nazionale Dopolavoro (OND 1925) was a national recreational club created by the Fascist party. Its function was to increase acceptance of the fascist ideology through influencing the minds of Italy’s adult population by controlling the populations’ leisure activities. It was a network of sports clubs, libraries, organised concerts, dancing, summer holiday activities. Participation rates: 40% of industrial workers and 25% of peasants were members.

In general, social and cultural policies were far less effective than those of Nazi Germany and Stalin’s Russia. Italian society was far less willing to accept the imposition of state policy and did not share the other state’s traditions of effective centralised governance. There was some control in the northern cities but little if any cultural impact was made in the rural south.
​Foreign Policies

The aims of his foreign policy were to gain what was called spazio vitale (‘living space’) for the Italian people, and to make Italy a great power in the Mediterranean, northern Africa and the Balkans. Although he hoped that his foreign policy would strengthen his regime, it actually ended up becoming what is generally regarded as the main factor in his downfall.

Mussolini’s use of the Corfu Incident in August 1923 is an example of how foreign policy did help him to establish and maintain power. Although, the Conference of Ambassadors eventually forced the Italians to withdraw, Greece made no official apology and Mussolini did obtain compensation from the Greeks. This increased his support within Italy and having pushed the Acerbo Law through the previous month, it was an important factor in winning a big majority in the April 1924 elections. As Mussolini was not yet in a position to achieve his aim of a great new empire by force, he followed a largely peaceful foreign policy for the next eleven years. Some aspects of this also helped to increase support for his fascist regime. For instance, in 1924, as a result of the Pact of Rome with Yugoslavia, he gained Fiume. This was a valuable port city that Italy had originally hoped to gain by the peace treaties of 1919—20 — and which had long been an aim of Italian nationalists
This shift to a pro-German policy was confirmed in July 1936, when Mussolini agreed to join Hitler in intervening in the Spanish Civil War to help General Francisco Franco overthrow the democratically elected Popular Front government. As in Abyssinia, Mussolini was again widely supported by a catholic nation and a pope who encouraged a ‘Christian crusade’. In October 1936, Mussolini moved closer to Nazi Germany when he signed the Rome—Berlin Axis and in December 1937, when Mussolini joined Germany and Japan in their Anti-Comintern Pact. These steps would soon prove a disaster for Mussolini and his regime.
The Second World War

Italy finally entered the war on 10 June 1940 — yet Italian forces had not recovered fully from the effects of the Abyssinian and Spanish wars. This led to food shortages and a growing dissatisfaction with the fascist regime. In particular, it led to the re-emergence of the first serious signs of opposition since the late 1920s.  The resulting poor performances of the Italian army in France, Greece, Yugoslavia and North Africa played a large part in Mussolini’s eventual overthrow on 24 July 1943
Extension and extras​ (essential for IB students.)

My films below provide you with a generic, conceptual overview of how consent can be manufactured in authoritarian states. My pages on the IB section of the site also provide you with more details.