Lesson 5 - The short-term causes of the French Revolution
The French Revolution was actually two revolutions. The first was led by intellectuals and lawyers, the men who led the Third Estate. The key event in this first stage of the revolution was 'The Tennis Court Oath', a dramatic moment when the representatives of the Third Estate defied the king. The second stage of the revolution happened less than a month later, when the ordinary people of Paris violently stormed the Bastille prison in search of gunpowder in order to defend themselves from the kings soldiers. This was the day the French chose to be their national day, 14th July, Bastille Day.

Into the long term context we have outlined above, a series of events begin to unfold in five discernible phases.

1. The Assembly of Notables refuses a tax reform.

Genevan financier (and father of Germaine de Staël - remember the name) Jacques Necker, appointed in 1777-1781, did more than anyone to try to resolve the French financial situation. He introduced important tax reforms, reduced the size of Louis state expenditure and even tried to make the king abolish feudalism. He was very popular. But the American wars, which he made possible through further loans rather than taxation, did much to ruin his careful policies.  He was sacked in 1781 and moved to Coppet where he bought a rather nice chateau.
​By 1786, Louis had run out of money. He was unable to borrow any more. Charles de Calonne, his new finance minister, came up with a simple solution. As things stood, the richer a person was, the less tax he or she paid. Calonne said another tax was needed. Everybody should pay this new tax, even the clergy and the nobles. To try to get the nobles on his side, Calonne called together some nobles to agree to his new tax on land. This Assembly of Notables met in 1787, but Calonne's idea was rejected and he was dismissed. The king then dismissed the nobles and tried to force the Paris Parlement to agree to the new law. They refused and insisted that only the Estates General could approve such a measure.
2. Louis backs down and agrees to call the Estates General.

Over the next year, the crisis worsened. There were riots in many towns and Louis still needed money. In August 1788, he made the following announcement: 'We need an assembly of our faithful subjects to help us get over our difficulties with money. We have decided to call a meeting of the estates of all the provinces so that they may tell us their wishes and problems. Every kind of abuse will be reformed.' This was a dangerous promise that raised people's expectations. The Estates-General, was to meet in May 1789 for the first time since 1614. This was what many people had wanted for years.
3. The Estates General meets amidst a social and economic crisis.

On 13 July 1788 a massive hailstorm had destroyed cornfields, vegetable plots, orchards and vineyards all over central France. This was followed by a drought. As a result, the harvest in 1788 was very poor.  The drought was followed by the coldest winter in living memory. Rivers froze over, stopping watermills from grinding flour. Blocked roads prevented food from reaching markets. And when the snow suddenly thawed in the spring, floods ruined huge areas of farmland. The price of bread increased dramatically, leaving people with less money to spend on other essentials. This led to a fall in demand for many goods which resulted in unemployment and even less demand. There were riots and strikes in may parts of the country.  At this point, in the spring of 1789, electors were invited to draw up lists of complaints they wanted the Estates General to discuss with the king. These cahier de doléances were produced all over France and listed in detail everything the people thought was wrong with country. Most importantly, they raised expectations still further that the Estates General was going to solve France's problems.  It's a tradition that has been recently been resurrected by Le mouvement des Gilets jaunes.
4. The Third Estate defies the king.

When the Estates-General met in the Palace of Versailles in May 1789, there were 1,201 deputies, or representatives. They were divided up as follows: First Estate - 300 deputies. Second Estate - 291 deputies. Third Estate - 610 deputies However, each estate had only one vote, so any ideas put forward by the Third Estate could be rejected if the clergy and the nobility were opposed to them. The Third Estate,  felt it was absurd that the nobles and clergy could outvote them. On 17 June 1789, the Third Estate declared that they were in charge. They called themselves the National Assembly. On 20 June, Louis locked them out of the hall, so they went instead to the indoor royal tennis court at Versailles. There they swore an oath, and promised to keep together until France was governed fairly. This was known as the Tennis Court Oath which was immortalised in the famous painting by Jacques Louis David (below). On 9 July, Louis gave in and ordered the other two Estates to join them. So far, the power struggle had been fought with words. It was soon to become violent. 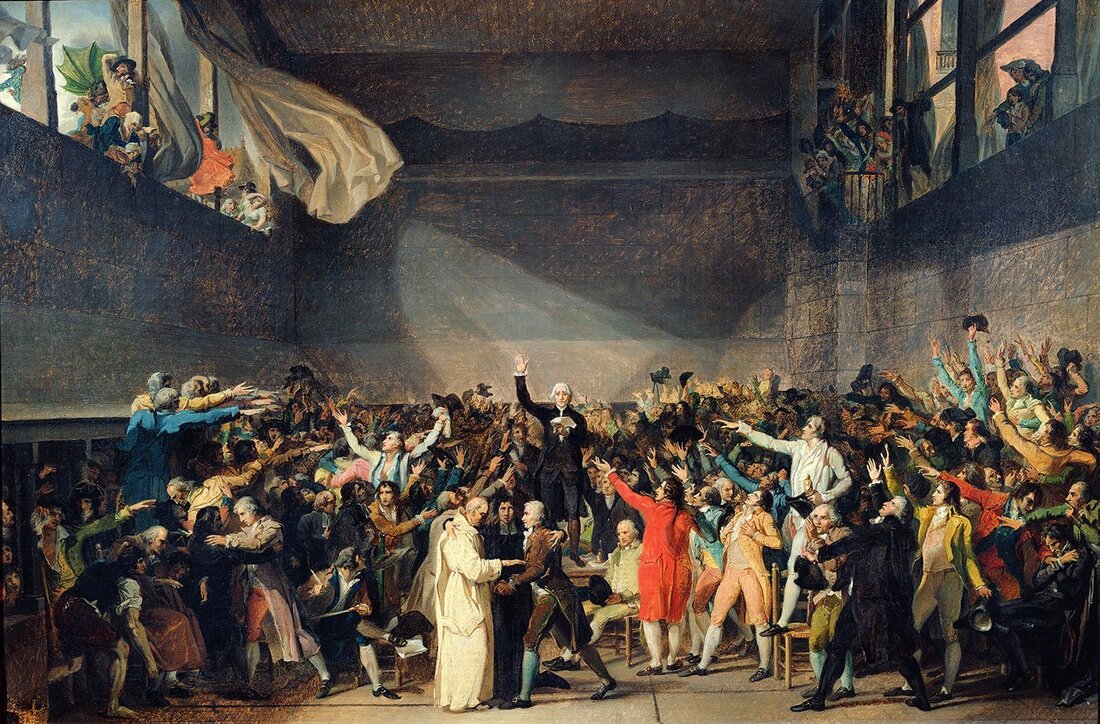 5. The storming of the Bastille.

Setting up the National Assembly was a great victory for the third estate but a defeat for the king. Louis XVI had lost control of the Estates General. Riots in nearby Paris showed that he risked losing control of the capital too. Urged on by the queen and members of his court, Louis ordered 20,000 royal troops to move into the area around Paris. He said this was to keep order there, but most people suspected that the troops were going to break up the National Assembly. People in Paris started to feel afraid. Their fears grew on 12 July. News came from Versailles that Louis had sacked the popular finance minister, Necker, and replaced him with a hardliner who opposed the third estate. People assumed that Louis was about to crack down on the National Assembly. Angry and frightened crowds started looking for weapons to defend themselves against the king's troops. The search for weapons went on for two days. Crowds broke into arms stores and stole thousands of guns. On the morning of 14 July rumours went round that there were tonnes of gunpowder in the Bastille, an old fortress in the cast end of Paris. The rest, as they say, is history
​