Lesson 7 - How and why did the king lose control of France between 1789 and 1791?
​The National Guard and the Paris Commune.

Louis XVI considered sending his army into Paris to recapture the Bastille. His war minister, however, warned him that the soldiers would probably refuse orders to do so. Louis therefore had to give up control of Paris. In July 1789 he ordered his army back to its barracks. To keep order in Paris he allowed the people to set up their own military force, the National Guard. To run the city, leading officials of the third estate formed a new local government, the Paris Commune. Towns and cities all over France followed the example of Paris. Rioting crowds attacked town halls, forced out the royal officials, and set up their own communes and National Guard units.
The Assembly begins its work

The deputies in the National Assembly were scared by the violence of the peasants. They took drastic measures to end it. On the night of 4 August, noble deputies, one by one, announced that they would give up their feudal rights and dues. By the next morning hunting rights, tithes, the corvee, and the rights of the mill and the oven had all been abolished. Feudalism was dead.

Three weeks later, the Assembly made another important change to French society. It issued a 'Declaration of the Rights of Man and the Citizen'. This stated that all men were free and equal in rights. It said people should have the right to speak and write freely. It changed the laws of arrest and imprisonment, and banned torture. Above all, it said that power in France belonged to the entire people, not just the king.
Reforms of the National Assembly

The deputies of the National Assembly followed the royal family to Paris, where they took over an old riding school as a meeting place. Over the next two years the Assembly made many new laws, changing the way France was organised and run. Consider the list of reforms below? Which reforms weakened feudalism and the aristocracy? Which reforms were particularly influenced by influenced Enlightenment ideas?
Reforms of the National Assembly
The reform of the Church

Most people welcomed the above reforms. On one issue, however, they were divided. That was the reform of the Church. On one side of the argument were growing numbers of people who thought the Church had too much power, too much land and too much money. They also thought that many of the clergy lived unholy lives.  See the contemporary images below which were critical of the church. Do you understand their meaning?
On the other side were millions of God-fearing Catholics who had never questioned the way the Church was run, and who could see no reason to change it. So when the National Assembly began to take land and money from the Church, many Catholics protested. Their protests grew louder in July 1790 when the Assembly drew up a law reducing the power of the Church. The law, called the Civil Constitution of the Clergy, said that priests and bishops must be elected like other public officials. It ordered all clergy to take an oath of loyalty to the French nation and the law. Over half the clergy refused to take this oath. They said that the Assembly had no right to interfere in Church affairs. The Pope supported their protest by condemning the new law. From then on, the clergy were divided between those who took the oath and who supported the revolution, and those who refused the oath and opposed the revolution. Millions of people followed the examples set by their priests. Before long, therefore, the entire nation was divided by the question of the Church and its power.
The flight to Varennes

Louis XVI was deeply unhappy with the Civil Constitution. He sided with the priests who refused to take the oath. This made it look, yet again, as if he opposed the revolution. Angry crowds protested at the gates of the Tuileries Palace. Urged on by his wife and by members of his court, Louis now decided to leave France. Their aim was to get help from the French princes who had already left France and had built up armies just across the frontier. They also hoped for assistance from Marie Antoinette's brother Leopold, the Emperor of Austria. They would then be able to invade France, get rid of the Assembly, and take back the power they had lost. But where would they go?
Leaving France,  was far from easy. Because the Assembly suspected that Louis might try to escape, there were guards at every door in the Palace. Louis and his family therefore had to make a secret escape. Close to midnight on 21 June 1791, Louis, Antoinette and their children, all in disguise, crept out of the palace through a temporarily unguarded door. A waiting carriage then took them eastwards towards Montmedy, close to the frontier 250 km away (see map above). 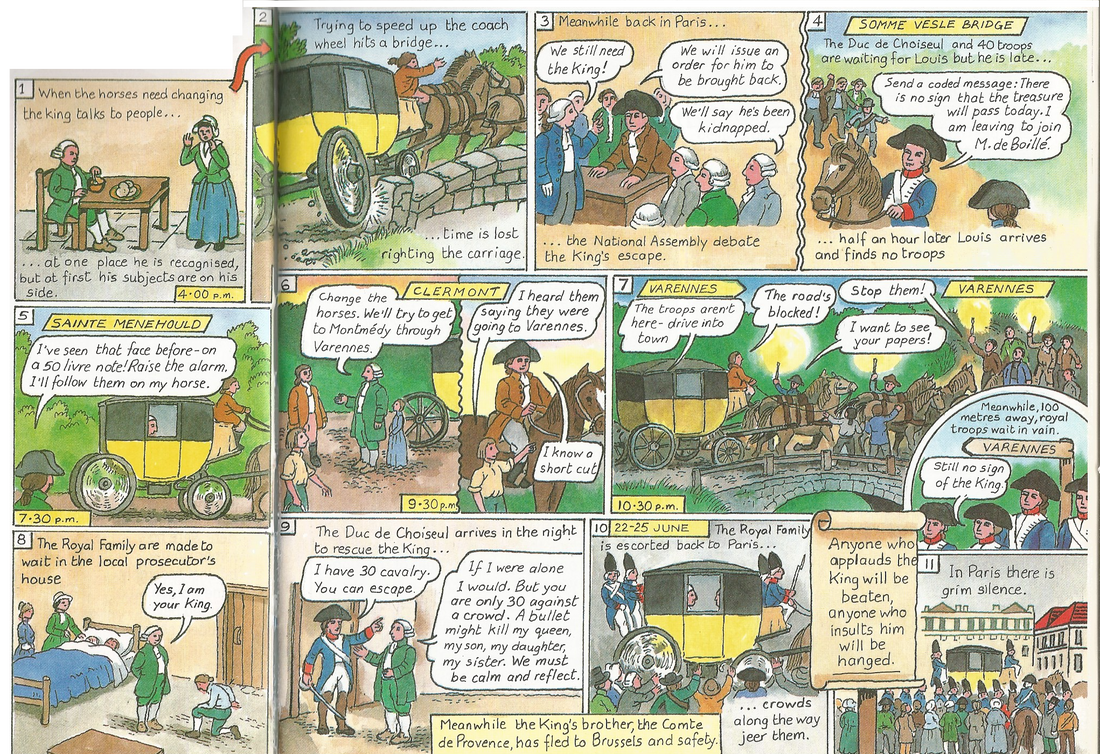 They were still 50 km from the frontier when they were recognised. News of their escape was sent ahead and the local authorities were waiting for them in the little town of Varennes. They were arrested and sent back to Paris the next day. As they went, crowds shouted insults and spat at the windows.
Activity

Read the text above carefully and watch the next part of the film on the French Revolution. Then download and complete the worksheet, explaining how at each stage the king gradually lost power.