Lesson 1 - Why was Britain the first country to have an Industrial Revolution?
​Starting in the later part of the 18th century there began a transition in parts of Great Britain's previously manual labour and draft-animal based economy towards machine-based manufacturing. It started with the mechanisation of the textile industries, the development of iron-making techniques and the increased use of refined coal. Trade expansion was enabled by the introduction of canals, improved roads and railways. The introduction of steam power fuelled primarily by coal, wider utilisation of water wheels and powered machinery (mainly in textile manufacturing) underpinned the dramatic increases in production capacity. The development of all-metal machine tools in the first two decades of the 19th century enabled the manufacture of more production machines for manufacturing in other industries. The effects spread throughout Western Europe and North America during the 19th century, eventually affecting most of the world, a process that continues as industrialisation. The impact of this change on society was enormous.
Why was Europe first?

One question of interest to historians is why the industrial revolution occurred in Europe and not in other parts of the world in the 18th century, particularly China, India, and the Middle East, or at other times like in Classical Antiquity or the Middle Ages. Numerous factors have been suggested, including education, technological changes (especially the Scientific Revolution in Europe), "modern" government, "modern" work attitudes and culture.

Some historians such as David Landes and Max Weber credit the different belief systems in China and Europe with dictating where the revolution occurred. The religion and beliefs of Europe were largely products of Judaeo-Christianity, and Greek thought. Conversely, Chinese society was founded on men like Confucius, Mencius, Lao Tzu (Taoism), and Buddha (Buddhism). Whereas the Europeans believed that the universe was governed by rational and eternal laws, in the East it was more generally believed that the universe was in constant flux and, for Buddhists and Taoists, not capable of being rationally understood.

Other recent historians like Jared Steel have suggested the physical geography of Europe and the existence of small rival nation states made all the difference. See this interesting extract and fuller version from Jared Steel's bestselling Guns, Germs and Steel and this series of documentary films.
Why Britain?

Economic historians are agreed about very little in this area, but on one point there is unanimity. No one reason by itself explains why Britain, a fairly remote group of islands in the north-west corner of Europe, became the world's first industrial nation.  We can, however, identify a number of factors that gave Britain an advantage. 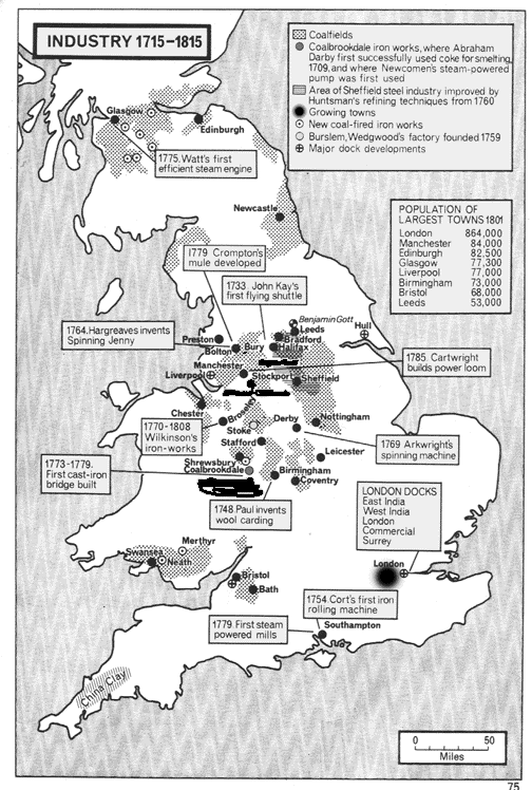 1783-4:  Henry Cort's 'puddling' process allowed coal, rather than charcoal, to be the main fuel used in iron refining

1786:     Edmund Cartwright's power loom invented; it promises to increase speed of weaving, but is not widely introduced to textile areas until 1820s
​
1802:     The value of exports of cotton goods exceeds those of woollen ones for the first time

Nine reasons why Britain was first.

Geography:    Britain is a small country with many navigable rivers, good mineral deposits and relatively few huge natural obstacles to movement of trade and people. Water power, crucial for technological development, is abundant.

Diversity:    Britain has a diverse climate, enabling good-quality wheat to be grown in the south and east and animals to be nourished in lush western pastures. Diversity aids growing specialisation in agriculture, while Lancashire's famously mild and wet climate was conducive to the processing of raw cotton.

Earlier economic development:    The eighteenth century had seen remarkable advances in both trade and industry, resulting in rising incomes and the capacity for many people to consume manufactured goods.

Rising population growth:    Britain's population almost doubled in the course of the eighteenth century and the growth was most marked towards the end of the century. More people in society mean more opportunities for production and consumption.

The role of government: After the Glorious Revolution in 1688, Britain was relatively stable but open to change.   During the late eighteenth and early nineteenth centuries, furthermore, governments were less and less likely to uphold apprenticeship regulations and other feudal restrictions on the free movement of labour.

Britain as an inventive society: Britain generated a huge number of innovative ideas during the eighteenth century. The famous industrial innovations - the Water Frame, Power Loom and the rest - were symptomatic of a much wider commitment to experiment, from which society benefited. Also new institutions, such as the Royal Society of Arts (1754), promoted innovation and diffusion of scientific and technological ideas.

Britain's advantage as a Protestant country: This explanation has its origins in the views of the German sociologist Max Weber who argued that Protestant values and lifestyles were more conducive to thrift, hard work and accumulations of money than were Catholic ones.

​Britain as an 'open society': Some social historians, notably Professor Harold Perkin, have laid particular stress upon the unique nature of British society. He sees a relatively liberal society open to talent in which the ablest can rise to wealth, influence and power. Also Britain's aristocracy was not a closed caste; younger sons often married the heiresses of bankers and overseas traders, while very successful entrepreneurs from humble backgrounds.
Activities

1. Explain the view that ‘the Industrial revolution was much more than just a revolution in industry’.

2. Why do you think some historians have been unhappy to use the term ‘revolution’ for the industrial changes in the late 18th and early 19th century?

4. This page suggests nine different reasons why the industrial revolution occurred first in Britain. Can you combine and reorganise the reasons into no more than five factors? For each factor make a big point, explain it and give an example. (PEE)
​
5. In your view, which is the most persuasive explanation for why Britain industrialised first?

Watch the video at the top of this page. To what extent does it confirm what you have learnt in this lesson?
Lesson 2 - The economic impact of the Industrial Revolution
If there are gaps in the page below its because Apple doesn't like Flash files so they don't show up on iPads, phones etc. Thank Steve Jobs.
This lesson deals with innovations in the British economy that made the industrial revolution happen. Paradoxically, the industrial revolution began in the countryside not in the towns. If the industrial revolution was going to happen, Britain needed to produce enough food for more people with fewer farmers than ever before. This was called the agricultural revolution.
​Iron and steel

Iron and then steel were the materials of the Industrial Revolution. Their production on a large scale made engineering, transport and industrial change possible. The main changes in the iron and steel industries between 1750 and 1900 were in the scale of production.
In 1783 Henry Cort's puddling and rolling process allowed the production of large sheets of iron. In 1775 ironmaster John Wilkinson used Watt's steam engine to work the bellows of his furnace. Equally important was John Naysmyth's invention of the steam hammer in 1839. This could hammer out huge sheets of iron to be used in making bridges and ships.
​Steam power

The early factories were powered by waterwheels and were located next to rivers. Gradually steam replaced water as the main source of power in the Industrial Revolution. The process of developing a steam engine capable of meeting the needs of industry took decades. The first steam engine was developed to pump water out of the bottom of coal mines.  By 1781 James Watt had managed to design a steam engine that could turn a wheel. The importance of Watt’s engine was that he had linked steam power to motion. However, his invention did not mean that every factory quickly changed to steam power. In 1800 there were only around 500 of Watt’s machines in use. However, by 1850 steam power was far more widespread, especially in the cotton industry. It also had a crucial role in the development of the railways because steam was the power used to drive the engines.
​Textiles

In 1750 most of the textile process took place in the home in the ‘Domestic System’. The workers would spin thread or weave cloth and then sell their produce to merchants. The benefit of this system was that the workers could work from home. The disadvantage was that cloth was expensive because the manufacturing process required a lot of labour. The change from the domestic system to the factory system was the result of the work of a number of inventors which were outlined in the last lesson. The result of these inventions was to make cotton easier to produce and with less labour, so the price of cotton goods fell. This in turn meant that demand went up, so more cotton was produced. Before improvements in steam engine technology, most of the new textiles factories such as Richard Arkwright's mill at Cromford in Derbyshire (below built in 1771) relied on water power.

The move towards larger cotton factories was partly the result of a shift from water to steam power. As a result of this change factories were moved from near sources of water power into towns and cities. The innovations in machinery were more suitable for use in the cotton industry than in any other. By 1850 it was cotton that had become the first industry to move to a factory system on a wide scale. ​
Lesson 3 - The social impact of the Industrial Revolution
These three BBC schools dramatic documentaries provide you with a good overview of the issues of this lesson.
Lesson 4 - The cultural consequences of the Industrial Revolution
Lesson 5 - The political consequences of the Industrial Revolution
Lesson 6 - Switzerland
End of Unit Test 1
There will be four sections to this test. Students should be guided by the number of marks available for the question, as an indication of how long to spend on it. ​ Try the quiz to get an idea of the questions. ​It's old fashioned Flash software from years ago, so must allow your browser to play it.
Question 2 – Source contextualisation [4 marks]

You will be presented with a historical source (visual, written, diagrammatic etc.) and you will be asked to interpret details from the source in their historical context. The questions will be particular to the sources chosen.
Question type examples:

What does the author mean by xxxx in the context of the causes of Industrial Revolution?
In the cartoon about imperialism, what is the meaning of xxxx?
In the graph showing population increase what is the significance of xxxx?

Question 3 – Recall and describe [6 marks]
In this question you will be expected to select and remember relevant historical information and present it accurately with detailed factual support.

In this question you will be expected to provide a coherent, well supported historical explanation that goes beyond a merely accurate, chronological ordering of events. The best answers will provide a well-structured, thematic account that relies on an analytical approach to the question that is well supported by accurate historical knowledge.
​
Why was Britain the first country to have an industrial revolution?
Explain how Britain was socially transformed by the industrial revolution.
Explain why Britain’s towns grew so rapidly during the 19th century.
How did the railways transform the culture of Britain?
Why was Britain on the verge of revolution in the period up to 1848?
Explain why Switzerland was one of the first countries to industrialise despite having few natural advantages.