Lesson 1 - What factors, both internal and external, encouraged decolonisation in Asia and Africa after 1945?
What is decolonisation?

Decolonisation is the process by which dependent countries (colonies) become independent of a colonial or imperial power. Decolonisation might be said to have begun with the American Wars of Independence and continued in the 19th century with the decline of the Spanish empire in the Americas and the Ottoman Empire in Europe. The independence movements you have previously studied which led to Greek independence (1821) or Serbia (1878) might be considered earlier examples of decolonisation. 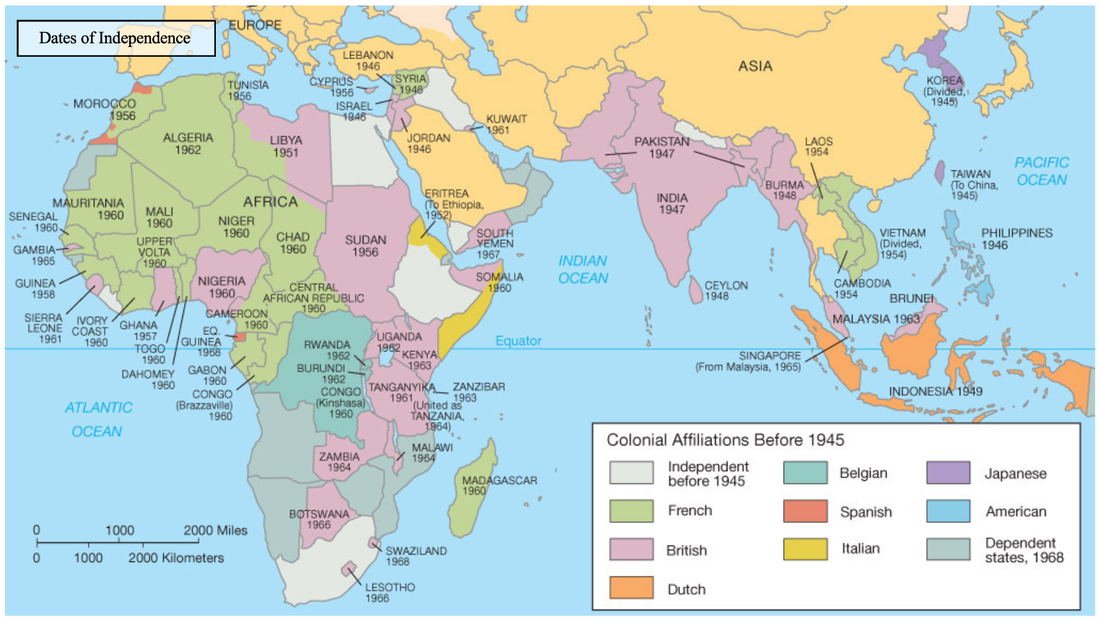 The history of the decolonisation of Asia and Africa begins with the end of the First World War, a war that had mobilised colonial armies to make common sacrifice alongside the ‘mother country’. The hope that this sacrifice might be rewarded - along with Woodrow Wilson’s principle of ‘self-determination’ and the break-up of the German overseas empire - led many anti-colonialists to anticipate that Article 22 of the Covenant of the League of Nations might, through the ‘mandate’ system, advance the cause of decolonisation. Indeed, the Versailles Peace Conference did inspire W. E. B. Du Boise to organise the first Pan-African Congress – demanding an end to racism and colonial rule - which also took place in Paris in February 1919.
The interwar period

The period up to the Second World War laid the foundations of the post-war decolonisation movement. Movements were beginning to emerge across the periphery, dedicated to achieving political independence. For example, in February 1927 the first meeting of the International Congress of the League against Imperialism and Colonial Oppression in Brussels declared:

The development of the African people was abruptly cut short and their civilisation was most completely destroyed. These nations were later declared pagan and savage, an inferior race, destined by the Christian God to be slaves to superior Europeans.

One of the first political independence movements was the Indian National Congress founded in 1885, which by 1906 had adopted the aim of swaraj or 'home rule'. In neighbouring Burma and Ceylon there were also nationalist movements, in the former under the guidance of U Ottoma, leader of the General Council of Buddhist Associations.
​But opposition to Indian independence remained strong among the English ruling elite, their reasons for opposing decolonisation often sound bluntly racist to modern ears. For example, Leo Amery, the Secretary of State for India during the war, wrote:

If India is to be really capable of holding its own in future without direct British control from outside I am not sure that it will not need an increasing infusion of stronger Nordic blood, whether by settlement or intermarriage or otherwise. Possibly it has been a real mistake of ours in the past not to encourage Indian princes to marry English wives ... and so breed a more virile type of native ruler.


This variation raises a number of questions that must be considered as you work through the case studies of national independence. For example, how did the different experiences of WWII influence the process of decolonisation? Or how did the level of economic and social development of the colony influence the nature of decolonisation? We might even ponder direct questions of correlation such as: is there a relationship between the nature of colonial rule and the tendency for some decolonisation experiences to end in violence?
External factors

An external factor of decolonisation refers to something that encouraged or made possible the process of decolonisation that was relatively ‘independent’ of the influence of either the coloniser or colonised. Often an external factor provided a context that might enable or hinder the process of decolonisation. Without doubt the most important external factor of decolonisation was the Second World War. The defeat and occupation of European colonial powers such as France and the Netherlands provided anti-colonial liberation movements with an opportunity in which both to assert their independence and fine-tune their political and military tactics, often against a new occupying power, Japan. The ultimate defeat of Japan created a power vacuum that well-established independence movements could fill and prove difficult to dislodge. Even though the most important imperial power Britain was not itself occupied during the war many of its colonies were. A second key external factor was economic. In an age of post-war austerity and international debt, Britain and other European powers often lacked the political resolve to maintain the economic burden of maintaining an empire in a Cold War age of changed priorities.
Finally, the newly formed United Nations Organisation based on the anti-imperial principles of the 1941 Atlantic Charter, would prove to be both a powerful conduit and platform for national liberation movements. In response to point three of the Atlantic Charter’s stated principles that ‘all people had a right to self-determination’; the leader of the Indian independence movement Mohandas Gandhi wrote to President Roosevelt:  ‘I venture to think that the Allied declaration that the Allies are fighting to make the world safe for the freedom of the individual and for democracy sounds hollow so long as India and for that matter Africa are exploited by Great Britain...’ ​
Internal Factors

1. Colonies  (a) direct rule – where officials & soldiers are sent to administer colonies (typically French) (b) indirect rule – via sultans, chiefs, other local rulers - urged leaders to get education in home country to become westernized (typically British)
2. Protectorates - local rulers left in place but expected to follow advice of European advisers - cheaper than running a colony (e.g. Britain in Egypt)
3. Spheres of Influence - areas in which outside powers claimed exclusive investment or trading privileges (e.g. Europeans created them in China, U.S. in Latin America)

If the pre-liberation, colonial administration is direct and comprehensive, the more dependent the imperial periphery is on the imperial core. This will make a smooth transfer of power more difficult to achieve. If, however, an effective modern state infrastructure has been developed with the support and integration of a local elite, then the process of independence is likely to be easier because the local population have the wherewithal and experience to run a modern state. A second related internal factor is the attitude of the colonial power to the question of independence. There are many external reasons like war and economic difficulty which can put pressure on colonisers to relinquish control, but there can also be internal factors which can just as easily lead to a change in policy. An election outcome or a change in government personnel can result in an imperial government more willing to negotiate independence. Had Churchill been re-elected in Britain in 1945, the future independence of India may not have been achieved so early. In contrast, Charles de Gaulle’s belief that the rebuilding of France’s international prestige required her to hold on to her global empire at all costs resulted in a very different attitude to national independence movements in Paris.
A final key internal factor was the very existence of an organised popular movement or political party, dedicated to the goal of independence itself. Organisations such as the Congress Party in India, Convention People's Party in Ghana or the FLN (National Liberation Front) in Algeria, campaigned - often illegally - for the creation of a state independent of colonial influence.