Unit 5 - The Early Middle Ages
Lesson 5 - Muhammed and Islam
But because Islam was a rival to Christianity and because wars or 'crusades' were fought between Christian Europeans and Muslim Arabs, Western history, history written by white Europeans has tended to ignore the achievements of Arabic civilisation (and other non-white, non-Christian cultures - see Black Lives Matter 2020). In this lesson we are going to redress the balance.  To begin watch the film '1001 Inventions and the Library of Secrets', which begins by explaining how the 'middle ages' are often perceived, even in school. 1001 Inventions is an award-winning international science and cultural heritage organisation that raises awareness of the golden age of Arabic science.
Muhammad started preaching, but his attacks on the Arabs’ false gods angered the rulers of Mecca who threatened to silence him. Fortunately the Prophet’s fame had spread to Medina, 250 miles (400 km) away. There many Jews and Arabs were attracted by his teachings. So in 622 Muhammad and a few faithful followers moved to Medina. This event, known as the Hegira (breaking of old ties), proved such a turning point that it became Year 1 in the Muslim calendar - just as Christ’s birth marks the start of the Christian calendar.

The Meccans attacked Medina several times, and fierce battles were fought, during which Muhammad himself to be an able military commander. When the Prophet finally captured Mecca in 630 he destroyed the idols in the Kaaba, but not the building itself. He pardoned many of his enemies and as a result many of them became followers of his faith. When Muhammad died, two years later, most Arabs had accepted the new religion of Islam - meaning ‘obedience to the will of God’. Those who ‘obey’ are called Muslims.
1. The confession of faith: ‘There is no God but Allah and Muhammad is His Prophet.’
2. Prayer: five times a day Muslims pray, facing the Kaaba (House of God) in Mecca.
3. Fasting: as an act of self-discipline all believers fast from dawn to sunset during Ramadan, the ninth month of the Muslim
4. Charity: a certain part of a Muslim's income is give to the poor and homeless, and other Islamic causes.
5. Pilgrimage: if possible, all Muslims must make a pilgrimage to Mecca once during their lifetime. 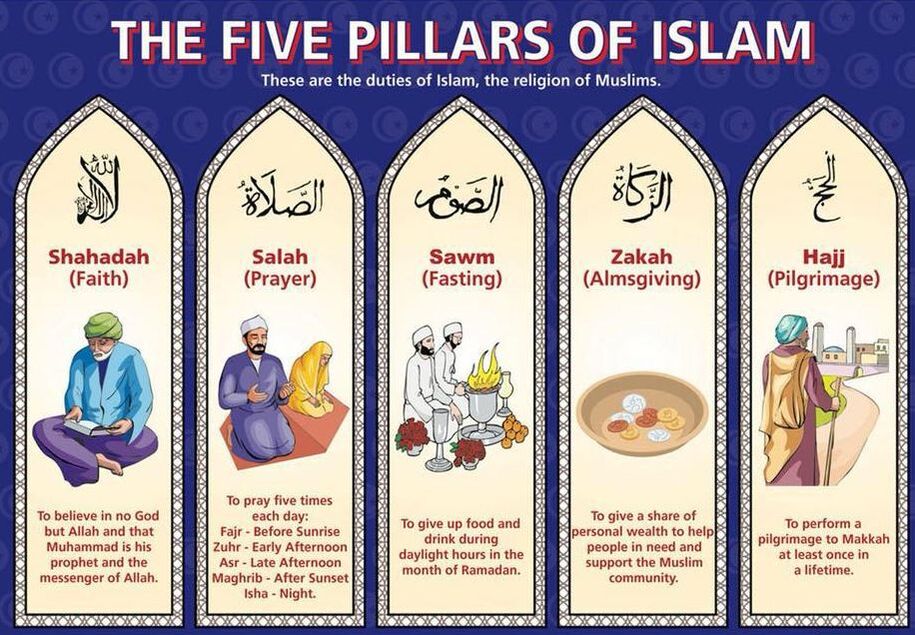 The Quran gave guidance to Muslims in their everyday lives. For instance, pork was declared unclean and forbidden; gambling and alcoholic drinks were also forbidden. Instructions were given for the treatment of slaves and the care of wives.  Muhammad promised to the faithful a Paradise where they might expect to dwell at ease in a ‘cool garden of spreading shade, and water gushing, and fruit in plenty’. On the other hand, the ‘evil and unbelieving’ would go to hell, a place of ‘scorching wind and scalding water and shadow of black smoke’. ​
Only six years after Muhammad’s death (638) the Arabs had conquered Syria and thousands were making new homes there. Then, turning east, the swift Arab horsemen overran the Persian Empire with astonishing ease (637-44). Before long Muslims were crossing the frontiers of India and China. Meanwhile, Egypt was conquered (642) and the Arabs began moving westwards along the North African coast. By 711 Muslim forces were crossing the Straits of Gibraltar into Spain. ​​ 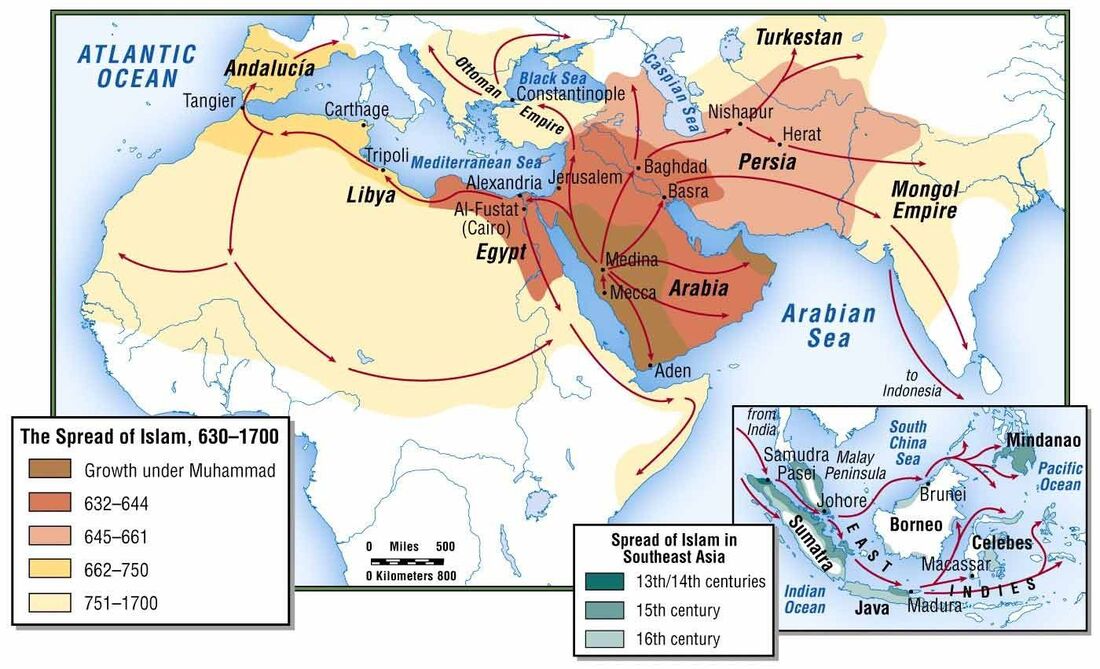 Not until 717 were the armies of Islam seriously checked. Advancing through Asia Minor (now Turkey) they attacked Constantinople by land and sea. But after a bitter struggle the Byzantines forced them back and recovered most of Asia Minor. But Islamic influence over the lands stretching from the Atlantic to the Himalayas remained. The Jewish and Christian populations had to pay taxes, although they were free to practise their religions. Most of the conquered peoples, however, became Muslims. Apart from Spain, these lands are still largely Muslim today.
Not only in mathematics but also in medical science Muslim scholars were far in advance of Europeans in the Middle Ages. They made important discoveries in the treatment of eye disorders, so common in the East. Al-Razi from Baghdad (865-925) wrote about 140 books on medicine, including the first scientific account of smallpox. Avicenna, who lived a century later, wrote a medical encyclopaedia which was the most complete collection of medical knowledge made anywhere in the Middle Ages.

Islamic art is also impressive. Islamic religious art differs from Christian religious art in that it is non-figural because many Muslims believe that the depiction of the human form is idolatry , and thereby a sin against God, forbidden in the Quran. Calligraphy (writing) and mathematical pattern are important in Islamic art. The following set of videos show how geometrical patterns helped create the art of the Alhambra Palace in Grenada, Spain.
Activities

1. Explain the relationship between Islam, Judaism and Christianity. Look at the 'Five Pillars of Islam'. What similarities with Christianity can you identify?
2. Why were Arabic traders and merchants so important?
​3. Do some research on three significant innovations of Islam's golden age.  This website is a good place to start. Try to illustrate your answer with appropriate images.