Lesson 3 - 1815-48 - The Age of Revolution
This is a tough lesson to teach. Sorry, it is. Trying to cover 30+ years of pan-European history and two dedicated Crash Course episodes in 90 minutes is a big ask. But we have to do it quickly because there's nothing in the syllabus about the need to study the period 1815 to 1848 in Europe at all!  So why bother? In brief, its hard to make sense of Italian and German unification after 1848 if the last thing you studied was the defeat of Napoleon at Waterloo. For the Matu syllabus, we also need to study the significant changes that took place in Switzerland in the period 1815-48. We cannot fully understand all these processes unless we are aware of what happened - especially in the Italian and German states - in the period 1815-48.  This is what this lesson sets out to achieve.
In brief
In rather more detail...
The first significant challenge to the established order happened in the Ottoman Empire in 1821 where Greek nationalism - Hellenism - was well developed. The struggle for Greek independence attracted support from romantics (famously Lord Byron) from all over Europe.  It helped that they were Christians seeking freedom from muslim rule. Greek nationalists successfully gained their independence largely thanks to military support in 1827 from Britain, France and even Russia who saw the Ottomans as a threat.
1830 Revolutions
In August 1830, a riot in Brussels turned into a full-scale revolt when Dutch troops tried to restore order. By September, most of Belgium was in revolt and a provisional government was set up. The King of the Netherlands' appealed for help from Concert of Europe as the rebellion was undermining one of the settlements of 1815.   To diffuse the situation, the Prussians and French agreed to a policy of non-intervention. They advised that the old frontiers of the United Provinces (Holland) and the Austrian Netherlands (Belgium) be re-established.  The countries of the Holy Alliance were unhappy, but Russia was busy dealing with a similar revolution for Polish independence, Prussia was unwilling to confront Britain and Austria would not act alone.  The Dutch chose to reject the terms and defeated the Belgians, so the French army marched north and by 20 August had driven the Dutch from Belgium.  Not until May 1833 did the King of the Netherlands accept a truce, and even then, he withheld his signature from the final treaty until May 1839. Make a note about this famous treaty on Belgian neutrality because it returns to the story in 1914. (See Matu 7)
Italy

It was the French example, again, which inspired the 1831 risings in Modena, Parma and the Papal States. In the expectation of French help against Austria, liberals in Modena pressed for constitutional reform and some form of Italian union in February 1831. The revolt spread to nearby Parma, while a provisional liberal government established itself in the Papal States. However, the risings were uncoordinated and as in Poland not supported by the masses.  Having first checked that the French would not intervene, the Austrian chancellor Metternich sent in the Austrian troops in March 1831.
Activities

What were the common causes of the revolutions of 1830?
Why were nationalist movements successful in Greece and Belgium but not in Poland and Italy?
France – King Louis Philippe was very unpopular by early 1848. When he attempted to outlaw all forms of criticism of his government, the people rebelled.  On February 23, fifty-two people were killed in anti-government protest. King Louis Philippe fled to England. On February 26, 1848, the liberal opposition came together to organise a provisional government, called the Second Republic. Universal male suffrage was enacted giving France nine million new voters. But the revolution saw a major split between the Parisian workers and the peasants from rural areas. (Again) The elections in April resulted in significant conservative gains (the peasants were conservative) and government began to reverse the reforms. In June there was another revolution by the working people of Paris. This time the liberal middle classes sided with the authorities who promised order and the rebellion was crushed with the loss of 1500 lives. The shift to the right was completed when, in December 1848, Louis Napoleon Bonaparte was elected president. Two years later in a coup d’état he became Napoleon III of the Second French Empire.
German States - The wave of revolt also swept across the states of the German Confederation. In the spring of 1848, riots broke out as German people sought liberal constitutions. Even the Prussian king, Frederick Wilhelm IV, was forced to agree to a democratic constitution and to support a move unify the German states. The Frankfurt Parliament was established to draw up a constitution for the unification of Germany, but members of the Assembly began to argue over which territory to include in the new Germany. Denmark lay claim to territories on its border and Czech leader Frantisek Palacky organized a Pan-Slav Congress in the city of Prague calling for Bohemia and Moravia to be part of a new Czech state within Austria.  This dispute forced the Frankfurt Parliament into a compromise and a constitution that would accept Frederick Wilhelm IV to be the head of this new government. However, Frederick Wilhelm refused to take this position, delivering the famous line, ‘I do not accept a crown from the gutter!’, and had by this time gained control of the Prussian army once again and soon brought the demise of the Frankfurt Parliament.
Austrian Empire – The Hapsburg Empire was deeply affected by the events of 1848 and was already by this time an empire in decline. The rise in nationalism was particularly threatening to the multi-national empire which included Hungarians, Slovenes, Poles, Czechs, Slovaks, Ukrainians/Ruthenians, Romanians, Serbs, Italians, and Croats. Again, inspired by events in France, Viennese liberals, students and workers joined together in street demonstrations. The Emperor reacted by sacking Metternich and promising constitutional reform. Across the empire, but especially in Budapest and Prague, nationalist demands for official language recognition combined with liberal demands for equality before the law and free press.  However, the tide soon turned when differences among the revolutionaries gave the reactionary forces an opportunity to suppress the revolution. In the summer of 1848 Austrian troops retook Prague and then Vienna. In December 1848 Francis Joseph succeeded Ferdinand I as the emperor of Austria and, using 140,000 Russian soldiers, forced the Hungarian revolutionaries to surrender their independence in August 1849.

There can be little doubt that the events of 1848-49 brought profound disappointment for liberals and nationalists across Europe, yet their causes did not perish. Within 20 years, the ambitions of moderate nationalists in Italy and Germany had been realised. But perhaps the most important consequence was in the development of working-class socialism. The lesson of 1848 was that they could not rely on middle class liberals.  If socialists wanted a new world, they would have to build it themselves.
Activity

Fill in the information boxes on the map of Europe entitled ‘The 1848 Revolutions ‘The Springtime of the Peoples’.  For each of the countries include information about how and why the revolution started and how the revolution was defeated. There is an additional download option here for those who want to be able to edit direct to Word.
​ 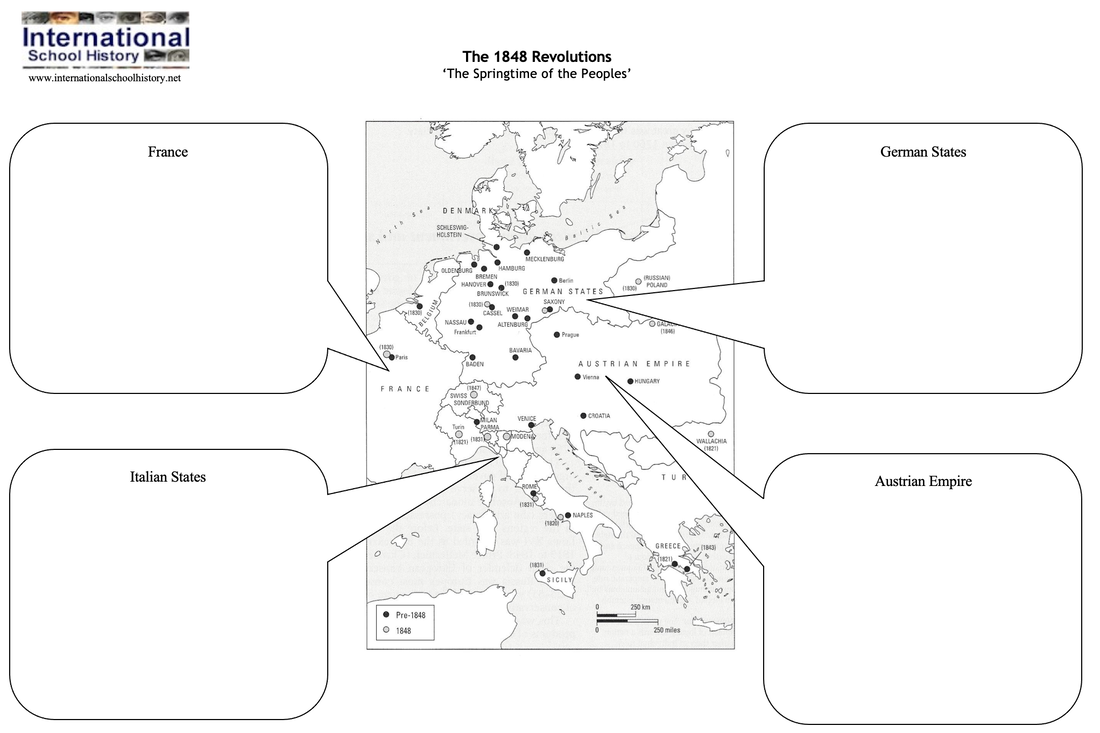