Lesson 1 - What was the impact of the French Revolution on Europe?
The era of the French Revolution and Napoleon ended in 1815 but it did not stop being important. For many years to come, people all over Europe continued to feel its effects. In all sorts of ways, it helped to shape their lives, their beliefs and the societies in which they lived. Measure a metre, weigh a kilogram or pour out a litre, and you are using weights and measures invented by the revolutionaries in 1795. Look at the flags of the countries of Europe, and you will see that half are modelled on the tricolour flag of the revolutionaries of 1789. But the most significant legacy of 1789-1815 is to be found in the big ideas unleashed: liberalism, nationalism and revolution.

The French Revolution began, when the Estates General of 1789 declared that it was a 'National Assembly' and set to work to write a constitution. It began by making a 'Declaration of the Rights of Man and the Citizen’; giving French citizens equal rights and liberties. The idea of giving people liberty and equality through a constitution was one of the important achievements of the revolution. And when Napoleon conquered Europe in the 1800s, constitutions were introduced into the states that came under French control. The ideas of liberty and equality therefore spread throughout Europe.

In 1815, however, after they had defeated Napoleon, the old rulers of Europe took back their thrones. Many got rid of his constitutions and went back to ruling their states in the old way. But they could not wipe out people's memories of what it was like to be ruled with a constitution. Millions of Europeans became 'liberals', believing in the ideas of liberty and equality, and wanting a constitution giving them rights. The revolutionaries of the nineteenth century borrowed images as well as ideas from the French Revolution. The most famous of those images was that of 'Liberty'. Liberty was portrayed as a young woman, Marianne, and she appeared in countless pictures, statues and models throughout the French Revolution. She appeared again during the revolutions of 1830. See Delacroix's image of the 1830 Revolution below. (This is popular with Matu examiners and was in the oral in 2020). Perhaps the most famous image of Liberty is the Statue of Liberty at the entrance to New York harbour. This 200 tonne, 97m high copper statue was a gift to the United States from the French people to show the friendship between their two republics. It was suggested by a French historian to commemorate the 100th anniversary of American independence.
Revolution

The revolution of 1789 was important because it successfully overthrew a social and political system of government that had dominated Europe for centuries. The ideas of the Enlightenment - the most important being liberty - provided a motivation for the revolt and some guidelines about the sort of new social and political order to be created, but most important was the fact that ordinary people had successfully risen up to force these changes to be made. Popular revolution had been shown to be effective; that is if it happened once, it could happen again. In this sense 1789 became a symbol - either inspiration or threat - that dominated the thoughts of Europeans throughout the 19th century.

For liberals, nationalists and (later) socialists in Europe who sought to bring about fundamental changes to the existing social and political order, 1789 was the inspiration that encouraged new revolutionaries to believe that radical change could be brought about through popular unrest. For those in authority, the French Revolution acted as a constant reminder of what can happen when 'ordinary' people are allowed to take power into their hands. Radicals may have drawn lessons from the Tennis Court Oath and storming of the Bastille, but conservatives focused their attention on the guillotine and the Terror. Europe would be engulfed by revolutionary moments throughout the 19th century - notably in 1830 and 1848 - that would bring about the social and political transformation of the continent. And as we have seen, even those countries like Britain that avoided revolution, brought about significant social and political reform because the ruling classes feared revolution would force about changes if they failed 'to reform in order to preserve.'
Nationalism

​The final key idea of the French Revolution was that France was a nation, not a kingdom. In other words, France was not the personal property of King Louis XVI: it was a union of all 28 million French-speaking people. For all of human history an indivudual's collective identity had been attached to a tangible social institution such as the family, the clan or the parish. Now for the first time, identity was projected onto an imaginary, abstract community of people who had never met in real life, the nation. As we saw in the previous unit, capitalism and the industrial revolution helped to create and sustain these imaginery communities as nation states defined in their opposition to other nation states.
The first act of the revolutionaries was to set up a National Assembly to speak for these people. Soon after, they adopted the tricolour flag to represent the nation — the red and blue colours of the people of Paris combined with the king's traditional white.

​During the Revolutionary wars, the French set up new nations in the lands they had conquered. Italian speaking people were brought together into nations such as the Roman Republic. Later, Poles gained their own nation when Napoleon created the Grand Duchy of Warsaw. Millions of Germans became citizens of new nations when Napoleon forced 300 German rulers to unite into just thirty states (see map below). Many European people thus found out what it was like to live in their own nation, and to be ruled according to a constitution. 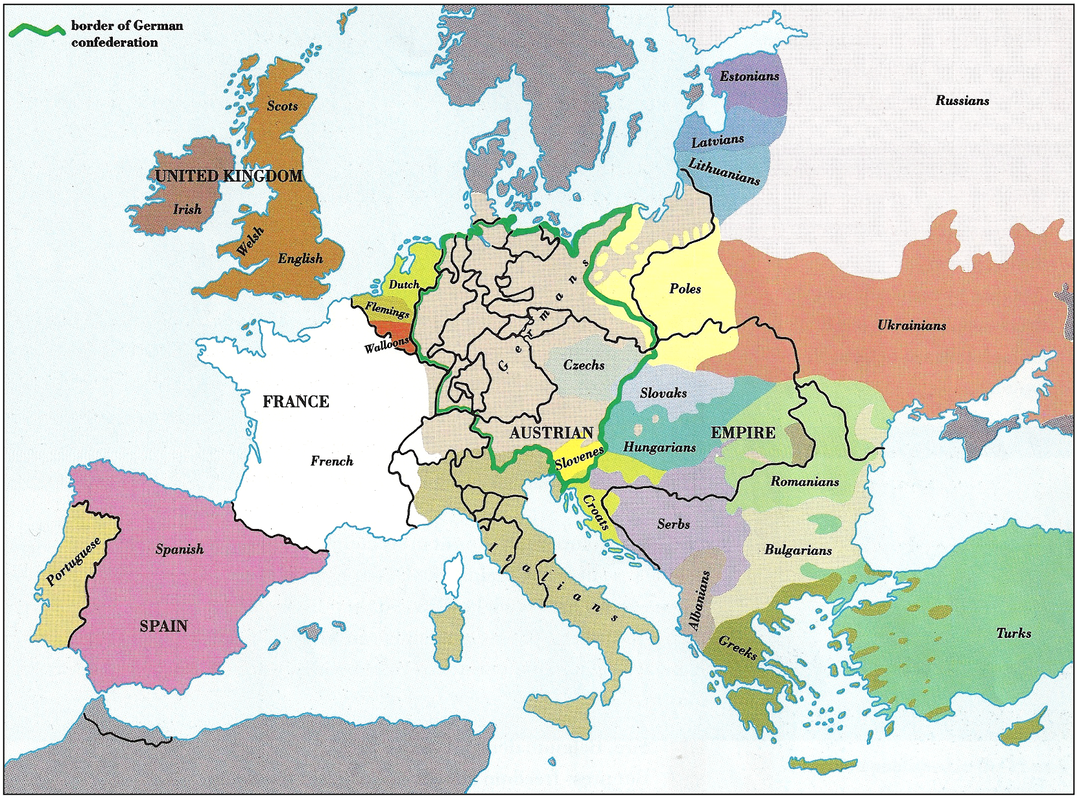 This came to an end in 1815 (see Lesson 3). Politicians from the countries that defeated Napoleon met in Vienna, capital of Austria, to redraw the map of Europe. At the Congress of Vienna, as this meeting was called, they re-created many of the old states that Napoleon had destroyed. Old royal families took back their thrones in Spain and the Italian states. A German Confederation of thirty-nine states replaced Napoleon's Rhine Confederation. Belgium, Holland and Luxemburg became a single Kingdom of the Netherlands. The new borders of Europe had nothing to do with people's nationality. (See map above) Millions of Italians were under Austrian rule, Poles under Russian rule, and so on. Napoleon and the French, however, had set an example that these people would not forget. Throughout the nineteenth century, people living under foreign rule, or living in separate states from their fellow countrymen, did what the French had done in 1789: they started revolutions to change the way they were ruled.
Activity

Read through the above text very carefully.  Write three paragraphs - in your own words - to explain the legacy of the French Revolution though the concepts of liberty, nationalism and revolution.

The Historiana website has a good source based summary of the ideas outlined in this lesson.