‘Social relations are closely bound up with productive forces. In acquiring new productive forces men change their mode of production; and in changing their mode of production, in changing the way of earning their living, they change all their social relations. The hand-mill gives you society with the feudal lord; the steam-mill, society with the industrial capitalist.’

We can identify three interrelated social transformations brought about by the Industrial Revolution:

Why did the population grow so quickly?
What happened to the traditional ‘domestic system’ of industrial production?
As the number of factories increased, the wages of domestic weavers went down. They simply couldn’t compete.

A contemporary writer explained why conditions were bad:  ‘These towns have been built by small speculators with no interest for anything except immediate profit. A carpenter and a brick-layer club together to buy a patch of ground and cover it with what they call houses.’ ​Houses were crammed together, ‘back-to-back’. Many had no foundations, were damp and lacked ventilation. Very few had any form of sanitation. Sometimes there was a privy (primitive toilet) shared between several houses (below).
​The shortage of housing often meant that one house accommodated several families, each having one room: ‘On the second floor lived a widow. In her room lived her grown-up son, two daughters, and two or three children of one of these daughters. Above on the third floor lived a market porter, his wife and four children.’ Charles Booth, 1889.
​Activities – Part 1 – Urbanisation

1. Explain carefully why the population grew so quickly during this period.
2. Explain both the causes and the consequences of the decline in the ‘domestic system’ in Britain.
3. Identify the main causes of poor living conditions in the early industrial phase and explain the main consequences of these conditions.
​2. New social classes.

The second significant social consequence of the industrial revolution was the rise in new social classes. The creation of new types of work, new working contracts and new relations between employers and employees, transformed the very nature of what it meant to ‘work’. In particular, two new social classes appeared, a new entrepreneurial middle class that Marx called the bourgeoisie and the urban, industrial working class that Marx called the proletariat. 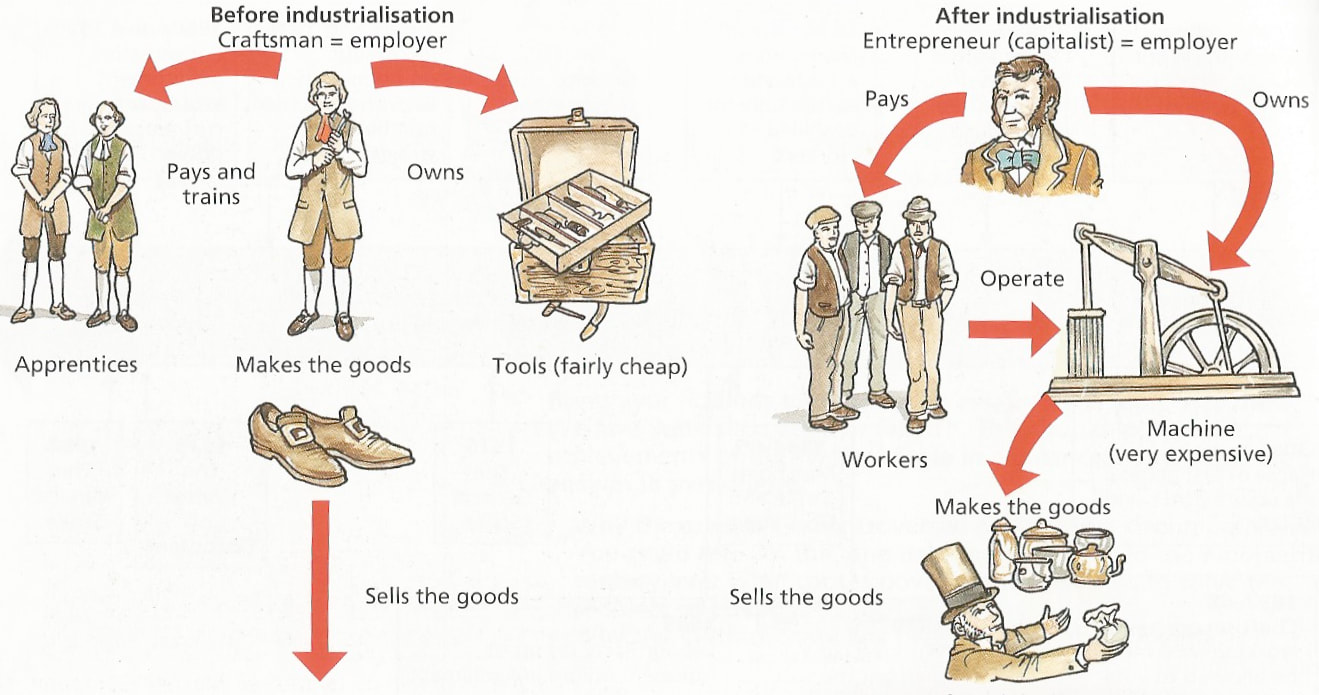 Diagram from Ben Walsh - British Social and Economic History 1997.
The new industrial working class were recent migrants from the countryside. They might be attracted by the freedom and excitement of the towns or driven from the countryside by declining wages and lost work opportunities. They were freed from feudal ties to sell their labour in the new factories, mines, foundries and civil engineering projects. They were unprotected, unorganised and easily exploited in badly paid, insecure and dangerous occupations. But they were also concentrated in greater numbers than ever before, better educated than the peasants of the countryside and like the capitalists, they were interested in more political power as a means of improving their lives. (Lesson 7)
3. New ways of working.
​The third significant social consequence of the industrial revolution were the new working conditions. Today we expect our place of work to be safe and reasonably comfortable, but 200 years ago there were no laws governing health and safety. A factory owner’s main concern was how much profit he made, and he was free to do this as he wanted. If he paid his workers more and put in safety precautions, he had to spend more money and therefore made less profit. Very few factory owners were prepared to reduce profits by improving the working conditions of their labourers. Unlike the workers in traditional skilled industries who were protected and represented by guilds, the new industrial working class had no union representation and because they were unskilled could easily be replaced.
Many new machines were invented for mass producing in the factories. These cost a lot of money. That these machines were often dangerous for the operators was of little concern to the manufacturer. Usually he was more concerned if any accident delayed the production process. Accidents were commonplace and many people lost fingers, hands or limbs with no compensation. ​Some factories were so noisy that the workers went deaf. Factories were rarely heated in winter or ventilated in summer. Steam or gases often made the air unbearable. There was no protection against dangerous chemicals or gases and the owner was not liable for any injuries.
“The packer has to enter a chamber which has been filled with chlorine gas. Though the worst of it has been allowed to escape, the atmosphere is still charged with deadly fumes. The heat is tremendous. Gassing is such a common matter that the men would describe it as they would tell you what their Sunday dinner was like.”  Reference to ‘bleach powder packers’ in a Home Office report of 1893.

“She was caught by her apron, which wrapped around the shaft. She was whirled round and repeatedly forced between the shaft and the carding engine. (Her right leg was found some distance away.)”  A factory inspector reporting what happened to a young girl in a textile factory in the 1840s.
All workers were fined for being late or slowing down in their work and they could be sacked immediately with no explanation.Gradually, as a result of popular and political pressure (see future lesson), laws were passed to regulate some of the worst excesses on the early industrial revolution in Britain.
​Activities – Part 2 – New social classes and working conditions.

1. Briefly outline the main characteristics of the new capitalist class and new working class.
2. Both workers and capitalists, wanted to see changes in how the country was run. What changes do you think the workers wanted? What changes do you think the capitalists wanted? Do you think they could agree on any changes?
3. Using the table of legislation (laws) passed in 19th century England below, identify three different working conditions that would have been allowed in 1800. For example, workers were not protected from dangerous machinery because a law wasn’t passed to ‘fence dangerous machinery’ until the 1844 Factory Act.
Extension and extras
These three BBC schools dramatic documentaries provide you with a good overview of the issues of this lesson.