Unit 3 - Roman Republic
Lesson 4 – Julius Caesar and the end of the Roman Republic.
After the destruction of Carthage, Rome became stronger and stronger and soon came to control most of the lands bordering the Mediterranean Sea. ​See the map below.
During The Punic Wars, many poor farmers had to leave their land to fight for Rome. Many were killed or injured. Those who were not, often found on their return that their farms had become neglected and had fallen into ruin. All this forced many poorer Roman families to sell their land to rich people and to abandon their homes and go to live in the poor parts of the city. The numbers of poor people grew, as did the gap between rich and poor. The politicians in the Senate gradually came to be the most powerful governing body in Rome. Many people felt that the Senate favoured the rich and pointed out that most senators were themselves of rich families. This made the Senate very unpopular with some Romans.

In contrast to the unpopularity of the Senate, the army generals became more and more popular and with each victory increasingly powerful. The Romans faced challenges from the Germanic tribes in the north, from Asia Minor (modern Turkey) in the east and even pirates in the Mediterranean.   Some of these problems caused Rome to rely more and more on its armies to protect its territory.  Many people began to think that such generals could rule Rome well and could save it from further difficulties.

By 50 BC, two Roman army generals had become greater than all others and powerful rivals for power. One of these was Pompey. The other was Julius Caesar. 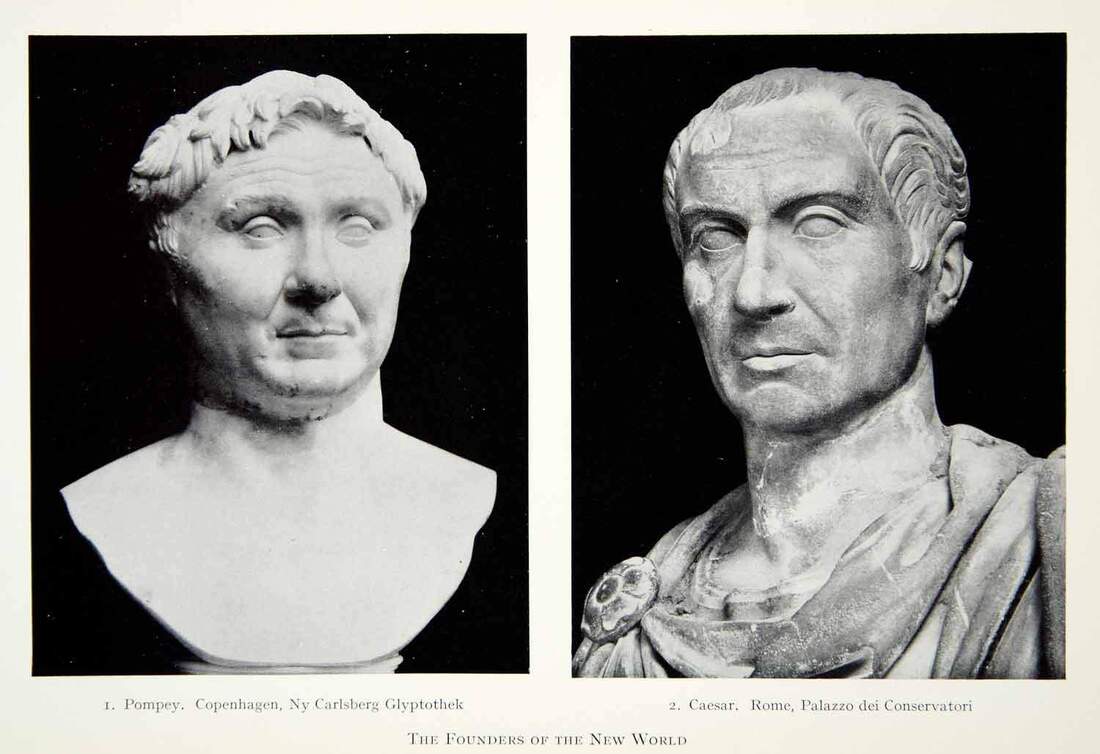 As we saw earlier, there were usually two Consuls, each elected for one year only and not allowed to be Consul again for another 10 years. This was meant to stop any one individual from becoming too powerful. But in 52 BC, the Senate asked Pompey to become Consul on his own; a position which would make him extremely powerful.  The Senate then demanded that Caesar give up his army, which he refused to do. Pompey then had no alternative but to declare war on Caesar; a war which most senators seemed to think that Pompey would win.  In 49 BC, Caesar marched on Rome.
If you've watched the rest of the film you will know that Julius Caesar defeated the armies of Pompey and the Senate. When Caesar marched into Rome the people gave him a great welcome.  Caesar's many reforms made him very popular and he was soon declared to be leader for life.
The death of Julius Caesar and the end of the Roman Republic

But not every one was content during Caesar's five-year rule. Many senators disliked him intensely. Others were afraid that he was becoming a tyrant who wanted to destroy the Republican system of government. Early in 44 BC, a group of senators under the leadership of Brutus and Cassius plotted to rid Rome of its unelected ruler. Brutus, Cassius and the other conspirators hoped that by killing Caesar they would save the Roman Republic from dictatorship. It was perhaps the most famous assassination in world history; many books and films have been made about it and even Shakespeare wrote a famous play that includes Caesar's murder.
Activity 3

Watch this famous scene from a 1970 filmed production of Shakespeare's Julius Caesar. As an interpretation of history, how reliable do you expect it to be? Then compare it to the Greek writer, historian and philosopher, Plutarch writing in the century after the death of Caesar. He is considered to be reliable source of information. ​
Compare and contrast Shakespeare's version of the death of Caesar with that of Plutarch.

1. In what ways are the two accounts similar and different?
​2. Why do you think Shakespeare's account is different?
3. Is Shakespeare's version of the story completely unreliable? Explain your answer.
What happened next?

The plans of the assassins began to go terribly wrong. A huge, angry crowd turned out for Caesar's funeral. After the funeral, the people rioted. They burned the houses of those who had plotted against Caesar, murdered some of the plotters and forced the rest to flee. Caesar's friend Mark Anthony, together with Caesar's eighteen year old adopted son Octavian, gathered a strong army against Brutus and his forces. Brutus committed suicide when his army was completely defeated in 42 AD. Octavian soon became the sole ruler of Rome. He ruled successfully for forty years and became known as Augustus (meaning 'the revered one'). Augustus was too clever ever to refer to himself directly as 'king' or 'emperor' but that, in fact, was what he had become. Jesus was born during the reign of Augustus. ​The Republican system of government - which Brutus and others had killed Caesar to preserve - was gone forever. The Roman Republic became the Roman Empire.