Lesson 4 - Imperialism in China
Two main systems have been used to transcribe Chinese into English. Most books published before the 1980s used the older Wade-Giles system. Using this method, China's capital city was known as Peking and the Chinese leader was Mao Tse-tung. The Pinyin system of transcription is now in common usage. Therefore, Beijing is the name of the Chinese capital and Mao Zedong is the name of the Chinese leader.  For the most part, pronunciation of consonants in the Pinyin style are much as they would be in English, but there are some exceptions. Thus c is pronounced ts, q is pronounced ch and x is pronounced sh.
In what ways was China an advanced civilisation?
If this superiority can be summed up in one image this it. ​ Zheng He' s 'Treasure Ship' next to Christopher Columbus' flagship.
Zheng He's ship and voyages predate Columbus by nearly 100 years.  In the 1400s, China owned the greatest seagoing fleet in the world, up to 3,500 ships at its peak. (The U.S. Navy today has only 430). Between 1405 and 1433 seven Chinese ‘treasure voyages’ were undertaken that used ships and technology well in advance of European navigation and 27,000 sailors, larger than the population of most European medieval towns.
What were the causes of conflict between China and the West?

Direct maritime trade between Europe and China began with the Portuguese in the 16th century, which leased an outpost at Macau starting from 1557; other European nations soon followed.  But China did not want to develop contacts with the West. They resisted contact with European culture and attempted to prevent European merchants, who were increasingly interested in China, from entering the country. The Chinese authorities attempted a 'closed door' policy (Canton policy), which allowed only a limited amount of trade with the Europeans, and this could only take place in a restricted number of ports and under strict regulations. The Europeans were only permitted to enter small areas in these designated ports. They could not go outside of these areas.  Ordinary Chinese people could not meet the European traders, and if any Chinese national was caught teaching the Chinese language to foreigners, the faced the death penalty.

A key issue for the merchants was that trade was made very expensive for them as the Chinese insisted on being paid in silver for their goods. Silver made transcontinental trade expensive because it needed to be insured against piracy. This meant trade was 'one way' as the Chinese would not accept any Western goods in exchange for their tea and silk. ​

Our dynasty's majestic virtue has penetrated unto every country under Heaven, and Kings of all nations have offered their costly tribute by land and sea. As your Ambassador can see for himself, we possess all things. I set no value on objects strange or ingenious, and have no use for your country's manufactures. This then is my answer to your request to appoint a representative at my Court, a request contrary to our dynastic usage, which would only result in inconvenience to yourself. I have expounded my wishes in detail and have commanded your tribute Envoys to leave in peace on their homeward journey. It behoves you, O King, to respect my sentiments and to display even greater devotion and loyalty in future, so that, by perpetual submission to our Throne, you may secure peace and prosperity for your country hereafter. Besides making gifts (of which I enclose an inventory) to each member of your Mission, I confer upon you, O King, valuable presents in excess of the number usually bestowed on such occasions, including silks and curios-a list of which is likewise enclosed. Do you reverently receive them and take note of my tender goodwill towards you!

​The British introduced the drug as a recreational habit to be smoked with tobacco and being highly addictive, smoking opium quickly took hold in China. The main company trading with China was the British East India Company. This company had sponsored the growing of opium poppies in India. In response the Chinese passed two laws banning the importation of the drug in 1729 and 1796. To get around this ban, and continue making huge profits, the East India Company began to sell opium to Chinese merchants who were able to smuggle it into China. Despite the bans the opium trade grew and grew. The trade was so lucrative that merchants from other countries, including Portugal, France and America, also got involved.
Activity 2
Explain how opium became central to European trade with China.
How useful are these contemporary cartoons as evidence about the opium trade in China?
Charles Elliott paid compensation to the Chinese man's family, but the Chinese authorities wanted the accused handed over to stand trial, the British refused, arguing that the men would not get a trial under Chinese law as confessions were extracted under torture. They also objected to the public execution the men faced if they were found guilty.
These warships then destroyed a large number of inferior Chinese war junks, leading to a huge loss of life. The British were then expelled from Guangzhou - which led to 20 warships being sent to China with 4000 troops on board. These bombarded Guangzhou and then sailed up and down the coast, causing and widespread destruction. The First Opium War lasted from 1839 until 1842. The British forces were better trained and better armed. The Chinese were fighting to stop the import of opium into their country - and the British fought to protect this lucrative trade.

The war ended with the signing of the Treaty of Nanjing.

The terms of the treaty included:
The Manchu rulers were not consulted on the terms of the treaty, nor did they have any choice but to sign it. British ships threatened to again bombard Chinese coastal towns until the treaty was signed. This was the first 'unequal treaty'. It was unequal because Chinese interests were completely ignored. After the war, opium flowed into China in ever increasing quantities. The Chinese authorities could only impose harsher and harsher punishments on users to try to cut down on the drug use.  France, the Netherlands and the USA increased their involvement in selling opium in China too. Shanghai became a symbol of the new relationship with a rapid expansion of trade and a thriving foreign community of merchants, particularly British. Here they created, at the centre of a Chinese community, a part of England, with an Anglican Church and an English Public School. In 1855, 437 foreign ships entered the port and the numbers continued to grow
Activity 3

Another war broke out between China and Britain in 1856. This time the war was triggered by an incident involving a ship called the Arrow. The ship was flying a British flag - although it was owned by a Hong Kong Chinese - and it was boarded by Chinese officials who believed that there were some well-known pirates on board. The Chinese police arrested the crew but in the struggle that followed the British flag was torn down. The British were furious and ordered the release of the crew and an official apology for the treatment of the flag. The Chinese returned the crew but did not apologise. Chinese gangs attacked and set fire to British homes and warehouses and the British warships bombarded Guangzhou. War broke out again, and again the Chinese were humiliated.

​The war ended in 1858 with another unequal treaty, the Treaty of Tientsin.
Tension remained high between the British and the Chinese - the latter attempted to resist fully implementing the unequal treaties. In 1860 British and French troops were sent to Beijing to enforce the terms of the treaties. While they were there, the troops looted and burnt the Imperial Summer Palace and forced the Emperor to flee into exile. The violence was widespread and the Chinese were again forced to sue for 'peace' and grant even more concessions . China had been utterly defeated and demoralised. A contemporary British comment makes clear the importance of the war and the subsequent treaty:

By this war we have practically opened out the trade of the Yangtze River, whence a vastly increased commerce is to be expected. We have inflicted a severe blow upon the pride of the Hsien—feng Emperor that the whole face of Chinese politics and our relations with that country must change, before he will dare insult our flag or obstruct our commerce. (Lt Col G J Wolseley)

A further clash with France developed in the 1880s, over the French consolidation of its hold on Vietnam. Traditionally, Vietnam like Korea occupied a tributary status with regard to Imperial China. The rulers of both Vietnam in the south and Korea in the north recognised the lordship if not the direct rule of the Emperor in Beijing. The French brutally severed any link, destroying a Chinese fleet in Fuzhou in August 1884, in the process. Five Frenchmen and 521 Chinese men died.
The Germans occupied a port in the Shandong peninsula and the British, not to be outdone and to stop anyone else having it took Weihaiwei. They also extended their hold on the south by extracting a 99-year lease on the Kowloon Peninsula to the north of Hong Kong. The French also seized territory in the south. 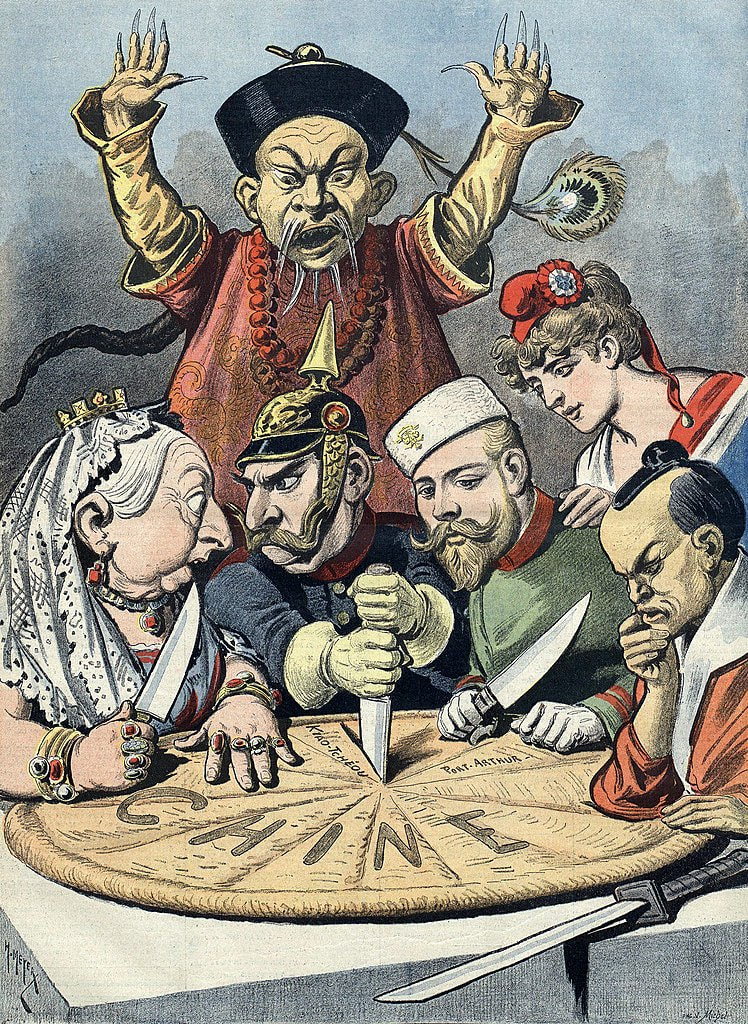 With reference to the map above, explain how the French, Japanese, Russians, Germans and the USA gained influence in South East Asia at the expense of the Chinese in the late 19th century.
The failure of self-strengthening and the Boxer Rising

The Chinese Qing government seemed helpless and unable to defend Chinese sovereignty. This led some Chinese officials to realise that the country would remain weak unless an effort was made to learn Western technology. The leading reformers believed that modernisation should be introduced, but without abandoning the Confucian way of life. In other words, their aim was not to Westernise China but to build a strong defence against the foreign powers. The modernising movement was known as the 'self-strengthening' movement.  But the Empress Dowager Cixi, who effectively ruled China from 1861 until her death in 1908, did not believe in reform.  There was no attempt to introduce a full programme of industrial and social change. Industrialisation was impossible without social change. For example, the first railway was built in China in 1876 (see below a photograph of its opening) but was dismantled a year later. As a result of this failure to modernise, China was unable to resist the influence of foreign powers.

​In this situation, popular feeling in north-east China erupted into what became known as the Boxer Rising. Tension had been growing for some time over western missionaries and their Christian converts. In the spring of 1900 isolated incidents coalesced into a mass frenzy of anti-western outrage. It was fuelled by a mixture of primitive magical beliefs and outraged Han pride. Railways which were spreading in the north were thought to disturb dragons, and telegraph wires which dripped rusty water after rain were regarded as sources of poison. Europeans and even those Chinese in possession of dangerous foreign objects such as clocks were killed.

'Railways carried "fire-carts" and rattling, iron-wheeled wagons all over the country, desecrating burial places, disturbing the spirits of the earth, putting honest carters and porters, trackers and boatmen, muleteers and camel men out of work. Equally obnoxious were the foreign operators of the chugging steamships on the inland waterways, the foreign mining engineers whose deep shafts upset the feng-shui even more than the railway tracks did, the foreign mechanics who put up the wires and the poles for the telegraph companies.

[A member of the Boxer movement commented:]

'The iron roads and iron carriages are disturbing the terrestrial dragon and are destroying the earth's beneficial influences... the red liquid which keeps dripping from the iron snake [the rust coloured rain water that dripped from the telegraph wires] is nothing but the blood of the out-raged spirits of the air.'
​
Quoted in Hibbert, C. 1970. The Dragon Wakes: China and theWest, 1793-1911.