Unit 3 - Roman Republic
Lesson 3 – Carthage, Hannibal and the Punic Wars
Across the Mediterranean Sea, just a few hundred miles away, lay the great North African city of Carthage  which had been founded many hundreds of years earlier by a people called the Phoenicians. You can see the Carthaginian Empire marked on the map below.

The Carthaginians traded all over the Mediterranean. The Romans were trying to expand their trade, but the Carthaginians treated the Roman traders as pirates and sank their ships. The Carthaginians also controlled much of Sicily which was a fertile corn-growing area. It was only a matter of time before Rome went to war against Carthage. The Romans referred to these wars as the Punic Wars. Punic was the Latin word for Phoenician.

1. Watch the short video opposite. Why were the Carthaginians such an important power in the ancient world?
The first Punic war, 264 - 241 B.C.

The Romans had become skilful soldiers during their conquest of Italy. They had a large army of 100,000 soldiers. But they were faced with an enemy which had an excellent navy. To win the war, the Romans had to win control of the sea. They had no navy and little experience as sailors. However, they began building a huge battle fleet. They also invented new tactics. On each ship they built a kind of drawbridge, called a corvus, with a huge iron spike on the end. The corvus stood upright by the mast. When an enemy ship was close it was lowered so that the spike sank into the enemy's deck. The Roman soldiers then charged across onto the enemy ship. ​ 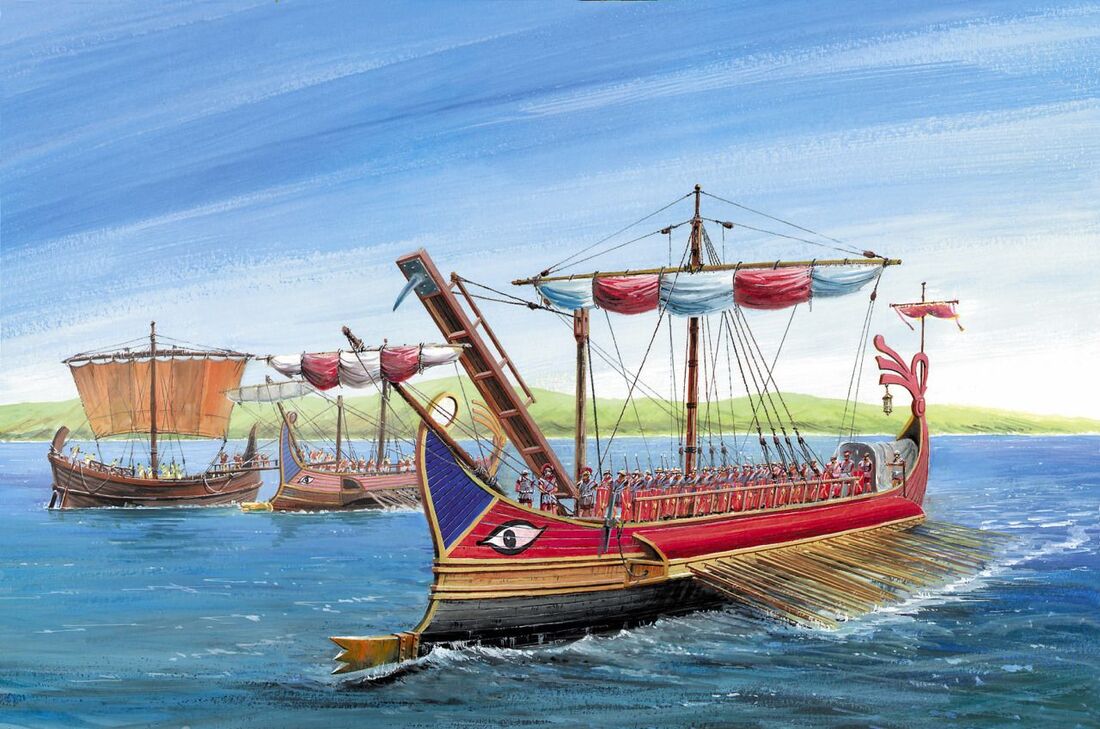 After over twenty years of war, Carthage was finally defeated and Rome took control of Sicily. As well as losing Sicily, Carthage also had to pay a huge sum of money (called an indemnity) to compensate Rome for the cost of the war. After this war, however, Rome continued to expand and took control of Carthaginian lands on the islands of Sardinia and Corsica. This, along with the loss of Sicily and the payment of the indemnity, made the Carthaginians angry and anxious to avenge themselves on Rome. The struggle between Rome and Carthage was far from over.
2. What were the causes and consequences of the first Punic war? 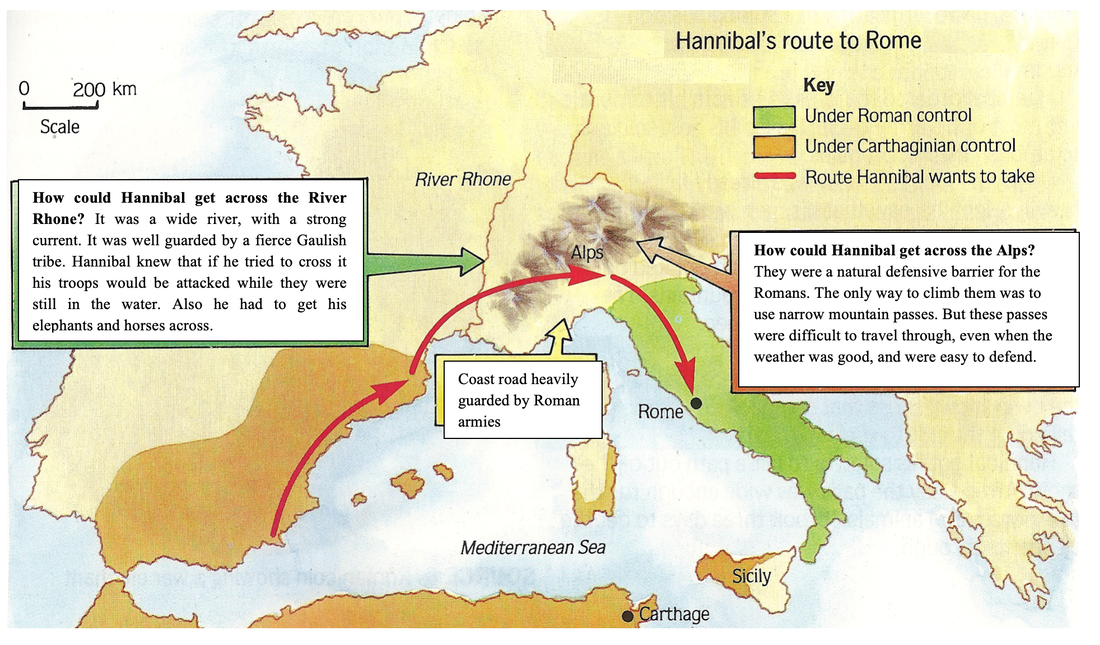 ​Hannibal first sent a small advance force of his best soldiers to cross the river secretly. Hannibal then filled small boats and canoes with the light soldiers. The large boats were placed upstream of the light boats to protect them from the full force of the current. Horses were towed behind the boats. One man on each side of the stern guided the horses. As they crossed, the Gaulish tribesmen poured out of their camp - just as Hannibal had expected. But Hannibal's advance party rushed in to attack them and the tribesmen ran away. The elephants then crossed, on huge rafts covered with earth and grass.
Hannibal knew his army might not be strong enough to attack Rome, and he had no siege engines. He marched south until he was within three days' march of Rome. The people of Rome were nervous, but didn't panic. They waited. Hannibal decided against attack. Instead he continued south, looking for supplies and trying to persuade the people of other cities to join him against Rome.

Hannibal spent the next fifteen years in Italy. The Romans sent a number of armies to fight him, but he defeated them every time. Finally the Romans changed their tactics. Instead of fighting him, they decided to wear him down. They stopped any extra soldiers or supplies getting through to him and they refused to fight any more big battles. Hannibal's army grew weaker with every year that passed. He had already decided that he was not strong enough to attack Rome, and few of the Italian tribes joined him. They all stayed loyal to Rome. Meanwhile, the Roman army concentrated its efforts on attacking Carthage. After fifteen years in Italy, Hannibal was ordered home to help defend Carthage from the Romans.

In 202 BC, near Carthage, Hannibal was defeated by the Roman general Scipio. The Carthaginians were beaten. Their lands in southern Spain were taken by Rome. After his defeat by Scipio, Hannibal remained on in Carthage. But the Romans accused him of trying to start another war and forced him to go into exile. Hannibal went to Syria and Asia Minor, where he helped the rulers there to resist Roman domination. When his allies were finally defeated, Hannibal refused to surrender to the Romans. He avoided capture by taking poison which he carried in a ring on his finger.

5. How was Hannibal finally defeated?

Many important Romans were determined that Carthage should be destroyed forever. In 149 B.C. a great Roman fleet laid siege to the North African city. Carthage resisted as well as it could for three years, but was finally captured by the superior forces of its enemy. The Carthaginian people were murdered or forced into slavery. Their city was burned and then dismantled stone by stone. The land on which Carthage stood was ploughed with salt so that nothing could grow on it. What remained of Carthaginian territory became the Roman province of ‘Africa’. Nothing remained but memories of ancient Carthage.

Rome was now the strongest power around the Mediterranean Sea, and her Empire grew rapidly. In the 70 years after the defeat of Hannibal, Macedonia (now south-east Europe), Greece and Asia Minor (part of modern Turkey) came under Roman rule. Egypt was under Rome's influence. The defeat of Carthage meant that Rome was the master of the whole Mediterranean area.

6. What happened to Carthage after the defeat by Rome?
​
Extension activity. Watch either of these documentaries to find out more about Hannibal. And if you've never seen History OverSimplified, you might enjoy these recent episodes.