Lesson 9 - The defeat of Germany and Japan
Activity 1.

The map above is taken from your textbook page 292. Using the information contained within it, complete the revision timeline below. You do not need to include all the information, but you should try to balance information from each of the three theatres: war in the west, south and east. Where the films or map do not provide enough information, a little additional research may be necessary. For example, I have provided additional information to get you started, which includes some material from previous lessons.
Download the revision timeline template here.  Remember to download and save your own copy before editing.
Operation Overlord - D-Day
Why were the Allies successful in the war with Germany?
1. Hitler made some bad decisions. He had been so successful up to the end of 1942 that he believed he knew better than his generals. He often overruled their advice. There are several instances: his turning aside from an all-out drive to get to Moscow in order to capture Kiev, in late 1941; his refusal to allow von Paulus to retreat from Stalingrad, leading to the humiliating surrender of 91,000 troops and 24 generals in February 1943 - a turning-point in the war. Hitler's meddling and increasing errors of judgement undermined the morale of his generals,

2. Germany was over-extended. Like the Kaiser, Hitler was denied his need for a short war. He was obliged to come to the rescue of his ally, Mussolini, in Yugoslavia and Greece - a distraction which pushed the start of the attack on Russia dangerously late into 1941. Once he had failed to crush Russia by the end of 1941, Hitler was committed to a war of attrition against a better-resourced enemy fighting on home territory. The extended German supply-lines, across inadequate roads in appalling winter weather, put German forces at a serious disadvantage. The demands of the Eastern Front drew resources away from North Africa so that by October 1942 Rommel had to face Montgomery at El Alamein with outnumbered forces. His defeat was another turning-point.

3. The enormous resources of the United States - in materials, money and morale - tipped the scales increasingly against the Axis powers. After Pearl Harbor (December 1941), Roosevelt could openly support the Allies: the USA provided about half of all the Allied war effort. The war cost them £84 million and they advanced another £12 million to the Allies.

Being asked to explain the defeat of Germany would be a classic question in an oral exam. Using my notes above, prepare an oral response that includes an introduction and conclusion and which can be delivered in 7 minutes maximum.
How was Japan defeated?
Textbook 295-7
The US policy after Pearl Harbor was to concentrate it support for Allies in the war in Europe. From 1941 to May 1943, the Japanese dominated the Pacific and the Far East, extending their empire 'Greater East Asia Co-Prosperity Sphere' into the Dutch East Indies, French Indo-China and as far as British Burma. (See map below) Although Japan had suffered some set backs, it wasn't until 1943 that tide of the war really began to turn.  Aircraft carrier domination by the US, supported by a blockade of Japanese ports by submarines, gradually provided the control that was necessary to recapture the Japanese occupied territories. The refusal of Japanese soldiers to surrender and their willingness to kill themselves for the emperor (kamikaze) meant that the casualty rate was astronomically high.  Harry Truman, the new US president, (Roosevelt had died in March 1945) decided to end the war rather than risk another year of American casualties. In August 1945 the decision was taken to drop two atomic bombs in quick succession. Japan surrendered on the 14th of August 1945. 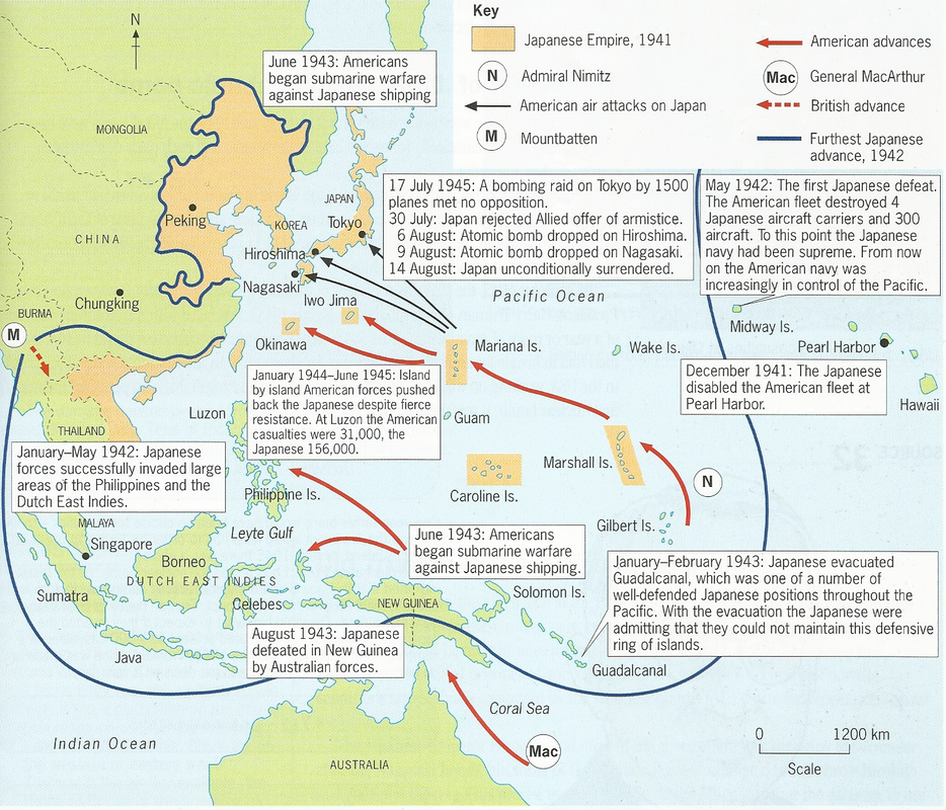