Year 11 - Warfare: A study through time

Lesson 2 - Medieval warfare and the conquest of England
​Big Questions

This is our first normal lesson. Having spent some time looking at different wars across time, now we're going dip into a series of nine case studies of particular conflicts at particular times. We will start in the Middle Ages at the Battle of Hastings in 1066 and end with the war in Vietnam which ended in 1975. If you thought seriously about why war is such an attractive theme for film makers, you will hopefully begin to understand why studying war through time provides such a useful window on the past. Here are some of my initial thoughts that will revisit after each case study.
​
Heritage Object - The Bayeux Tapestry

This is our entry point into medieval warfare and as a commemoration of warfare there is nothing more famous. The Battle of Hastings of 1066 that it commemorates is one of the most significant in European history. It marked the last successful invasion of Britain, saw the introduction of Norman feudalism in the British isles and closely tied English and French history for the next few hundred years. The event even helps explain the richness of the English language and its curious mixture of Germanic Anglo-Saxon (70% words and grammar structure) and largely Norman-French for the rest.  The Bayeux Tapestry has been part of UNESCO's 'Memory of the World' register since 2007.

At the start of 1066 England was a country ruled by Anglo-Saxons, the northern Germanic tribes that had descended over Europe after the fall of the Roman Empire. When their King Edward the Confessor died in January 1066 he left no heir and the line of succession was not clear. The most powerful English lord, Harold Godwinson took the crown but was challenged by Vikings in the north and the French descendants of Vikings (Normans - 'Norsemen') from the south. The claim to the English throne by the leader of the Normans, William the Bastard, will be the focus of this lesson because it is central to the Bayeux Tapestry. This is the important scene.

This is 1064, two years before the death of Edward the Confessor. On the left with the sword is William of Normandy, on the right with the moustache is Harold Godwinson. The text above says 'UBI HAROLD SACRAMENTUM FECIT WILLELMO DUCI', which as you know means 'Where Harold made an oath to Duke William'. An 'oath' is a promise. In this scene, Harold is shown swearing an oath to help William of Normandy to become king of England. The key question of the lesson is did this really happen?  Go to the activity page.
The consequences
There may be some historical doubt about whether William had a genuine right to the English crown, but the outcome of the Battle of Hastings and its significance is unquestioned.  ​
The Feudal System.

​A medieval king like William in reality had considerably less power than a modern dictator. In the absence of modern communications - road, rail and telecommunications - a king depended on loyal, local military leaders to do the governing for him. After the Battle of Hastings, William was able to govern a hostile foreign land by rewarding the knights who had fought alongside him with land in England that they would govern on his behalf. This is known as the feudal system.
Homage consisted of the vassal surrendering himself to the lord, symbolised by his kneeling and giving his joined hands to the lord, who clasped them in his own, thus accepting the surrender. When Harold made his oath to William he was also paying homage.
The Knights

In return for fiefs (land), the vassals made promises, the most important of which was to serve the lord as a soldier for 40-60 days a year. It was the knights as lords of the manor or demesne who really controlled medieval Europe. The land they had been granted was theirs to pass on through inheritance to their eldest son. This guaranteed that authority was passed on from generation to generation and that a class of rulers emerged who owed their important social role to tradition. It also helped that the church encouraged the belief that the inequality of the feudal system was divinely ordained, that people were born into a 'station' in life chosen by God.
Training to be a knight.

When a boy was eight years old he was trained as a page. The boy was usually the son of a knight or of a member of the aristocracy. He spent most of his time strengthening his body, wrestling and riding horses. He also learned how to fight with a spear and a sword. He practiced against a wooden dummy called a quintain. At the age of fifteen or sixteen, a boy became a squire in service to a knight. His duties included dressing the knight in the morning, caring for the knight’s horse, and cleaning the knight’s armour and weapons.
Activity

Every history student should draw a diagram of the feudal system at some point in their history education. I remember drawing a very boring pyramid style, feudal system diagram when I was in school. You can draw a boring one if you want, or you can design something that interprets the concept of hierarchy much more imaginatively. Either way you need to be able to explain how feudalism worked, because I might ask you to do that in examination. Add your completed diagram and explanation to your OneNote. My old website has a collection of rather more interesting creations made by my students.  Below are some of my favourites and it now includes some from students at Ecole Moser. 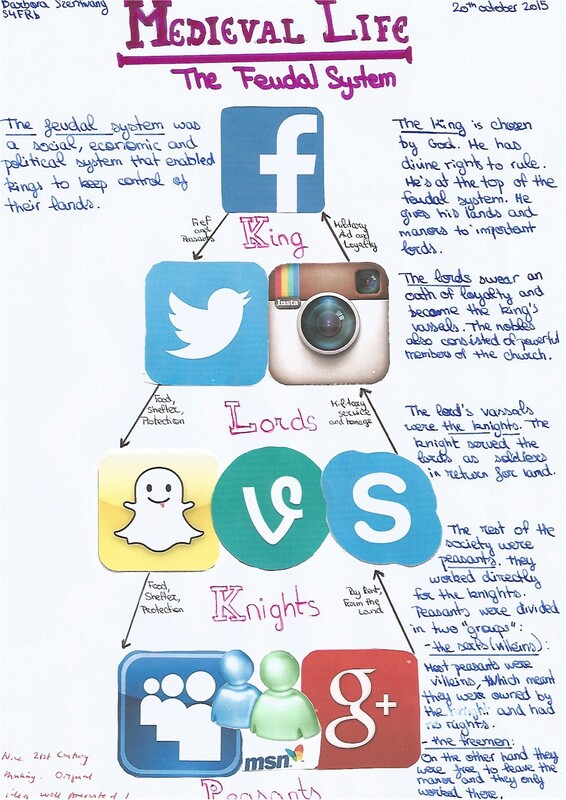 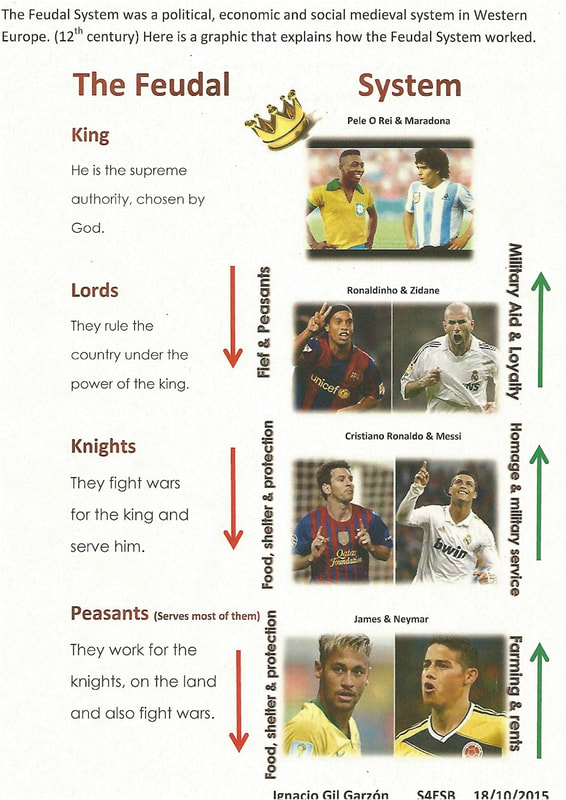 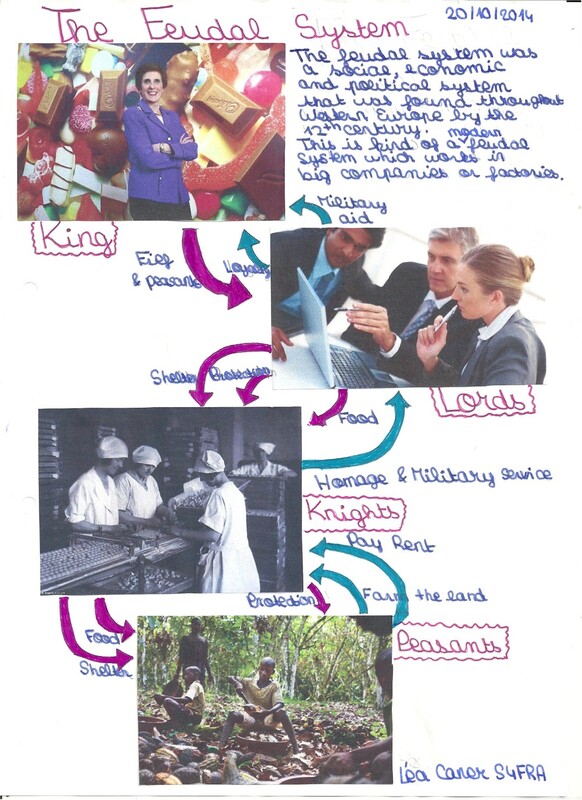 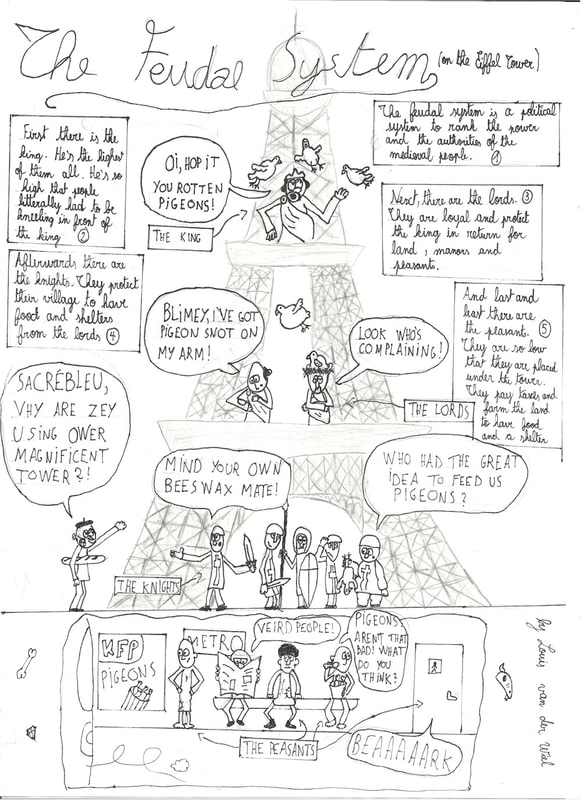 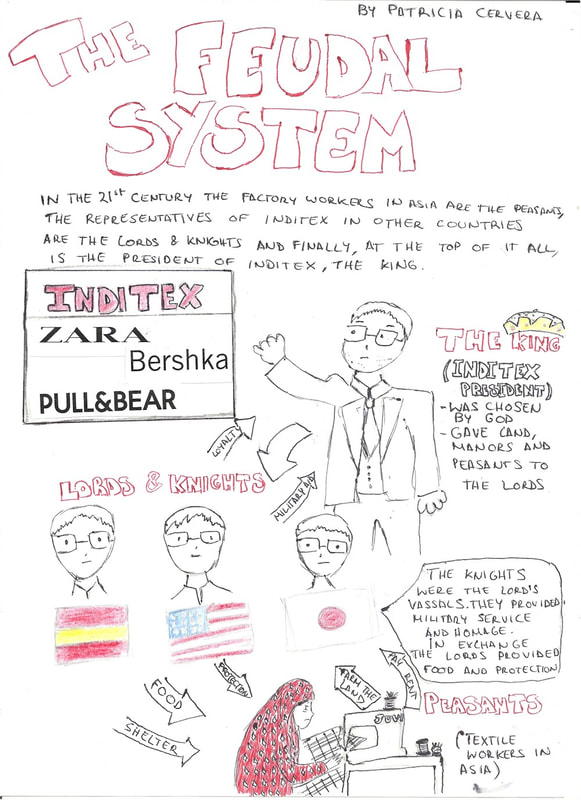 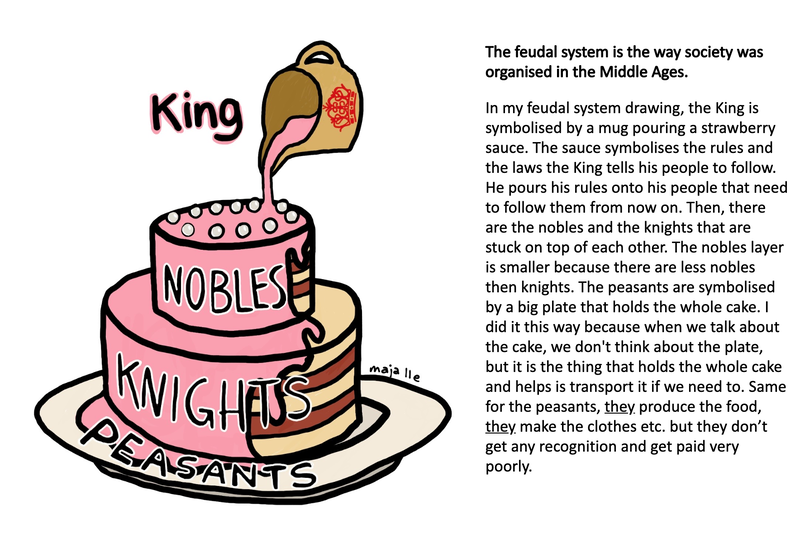 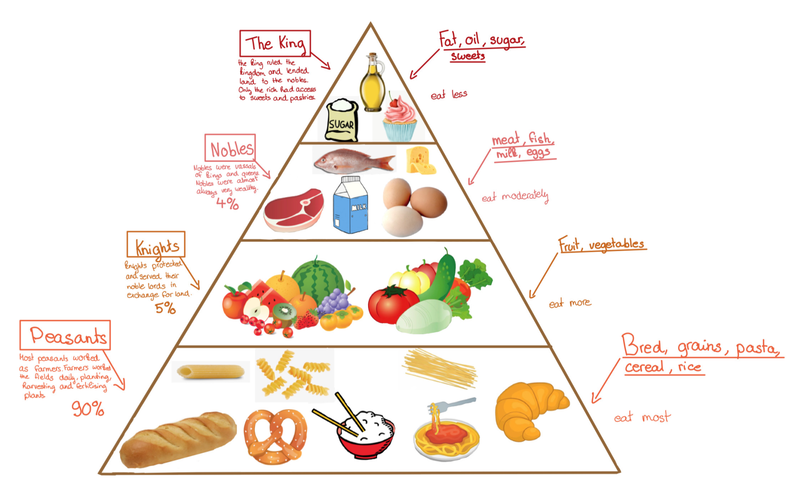 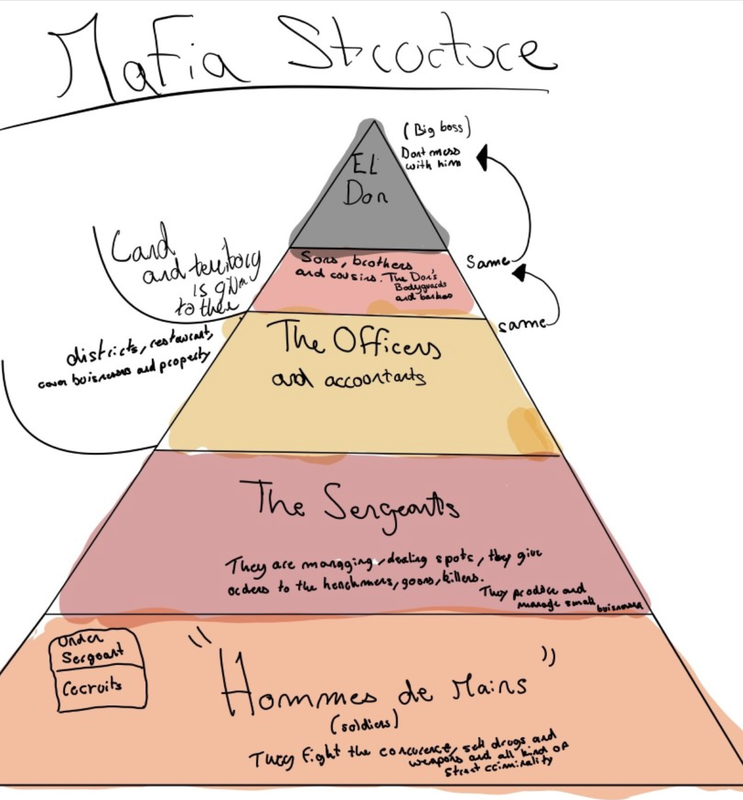 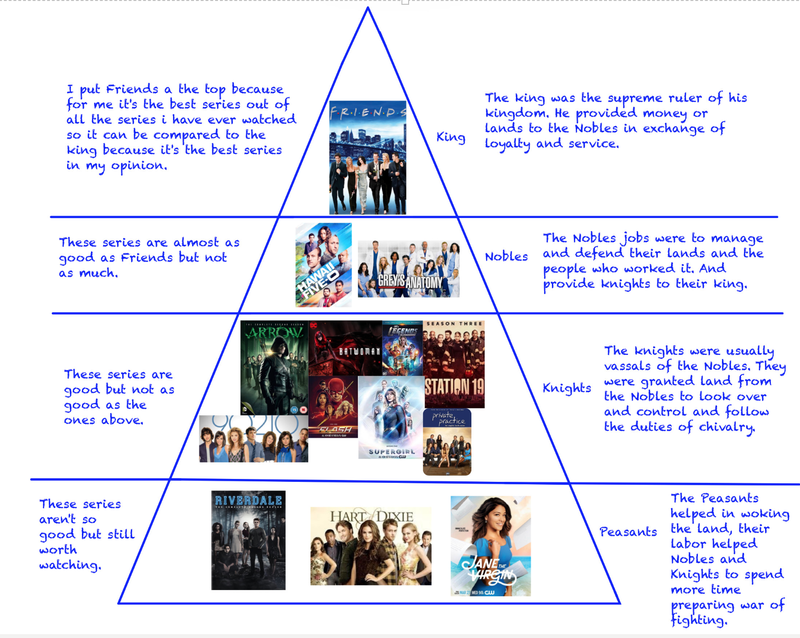 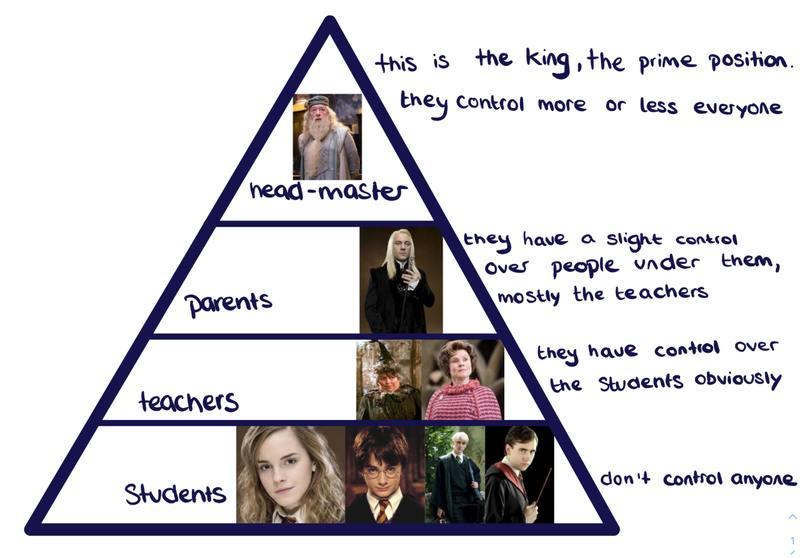 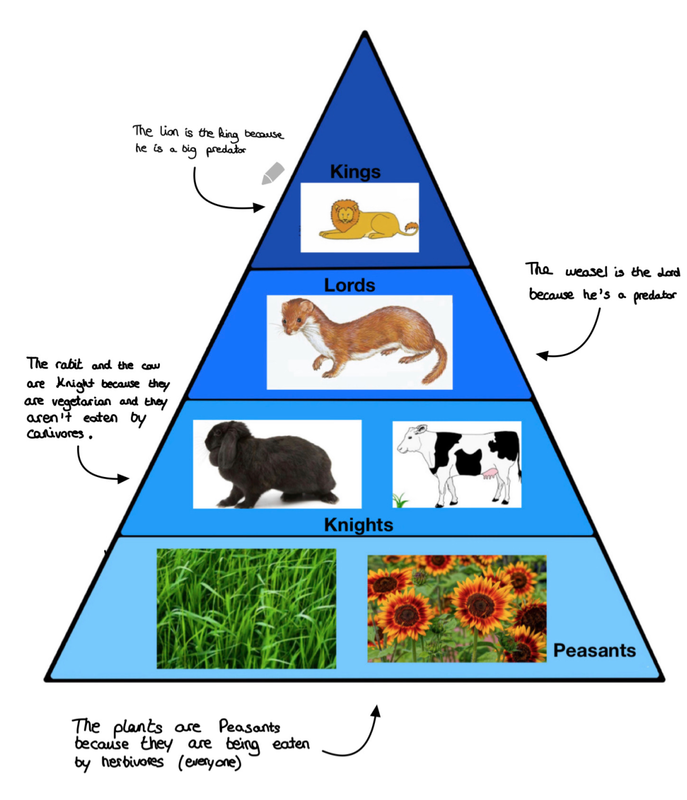 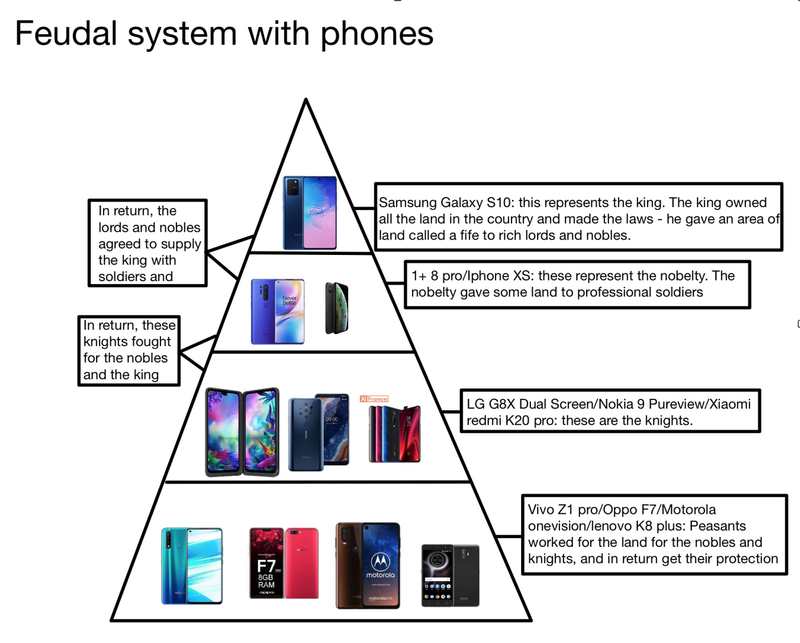 When this is finished you can move on to the case study about the the events of 1066. Finally, add the Battle of Hastings (1066) to your timeline. Write between 50 and 100 words and try to upload a picture of the Bayeux Tapestry to go with it.