Lesson 7 - German Unification - 1848-71
The section which follows is based on an edited extract from History of Europe and the Middle East, IB Course Companion 2010.
​The German states before unification

The 39 states that made up the German Confederation created in 1815 varied in size, government, economy, religion, influence and even dialect. On the one end of the scale were the two rival powers in the Confederation, Prussia and Austria—both large powerful monarchies with modern militaries—one Protestant, one Catholic. At the other end of the scale were the free cities such as Frankfurt. In between these two ends of the spectrum were all manner of states generally ruled by some form of monarch. Although the industrialisation of the German states had begun earlier, it accelerated rapidly after 1850.
The emergence of Prussia: Otto von Bismarck, von Motke and army reform.

When Friedrich Wilhelm I came to the Prussian throne in 1860 there were a number of powerful forces on the move in both Germany and Prussia.  Ideologically there was resurgence in liberalism during this period. As in Britain, the new industrialists embraced a liberalism that looked to a constitutional basis for Prussian society and a more limited role for government. This liberalism was combined with a renewed German nationalism that had been dormant in the aftermath of 1848. The rivalry between Prussia and Austria had also became more apparent. Into this situation stepped the new Chancellor Otto von Bismarck.
The inability of Prussia to play significant role in the Crimean War had illuminated the fact that the once fierce Prussian army, had fallen into neglect. This was to be rectified with the appointment of Helmut von Moltke to the position of army chief of staff in 1857. Moltke instituted a series of military reforms in the early 1860s that were to transform the Prussian military into the model of a modern army.​
The Danish War 1864

Germany was famously unified after a series of three wars. The first of these was the Danish War. When the new king, Christian IX, came to the throne, he moved to absorb Schleswig into Denmark by way of a new Danish constitution. While this was met with great approval by Danish nationalists, German nationalists were outraged and the German Confederation voted for armed intervention. When the Danes would not back down, a joint force of Austrians and Prussians moved into the duchies in early 1864.  After eight months of fighting, the Danes capitulated. Prussia annexed Schleswig and Austria Holstein.
By the Treaty of Prague Prussia annexed Hanover, Schleswig-Holstein, Hessen-Kassel, Nassau, and Frankfurt. The German Confederation was dissolved and replaced by a North German Confederation, which consisted of an expanded Prussia and 21 other northern German states.
The Franco Prussian War

The Treaty of Prague left southern Germany in an unstable situation. The states were militarily allied to Prussia and economically part of the Zollverein, but politically independent. Public opinion in the southern states largely opposed any unification with the north and Bismarck was concerned that the Catholic southern states might become natural allies to Austria or France.  German nationalists, however, saw the exclusion of these states from the North German Confederation as an affront to national unity. Popular nationalism and the popular press were to become important tools in the next stages of Bismarcks plans for further Prussian expansion.
Moltke outmanoeuvred one of the main French armies and with Napoleon III in attendance encircled them at the Battle of Sedan on 1-2 September 1870. (Below a painting by Wilhelm Camphausen shows Napoleon III and Bismarck after the Battle of Sedan). With the capture of the Emperor came the downfall of his government in Paris. 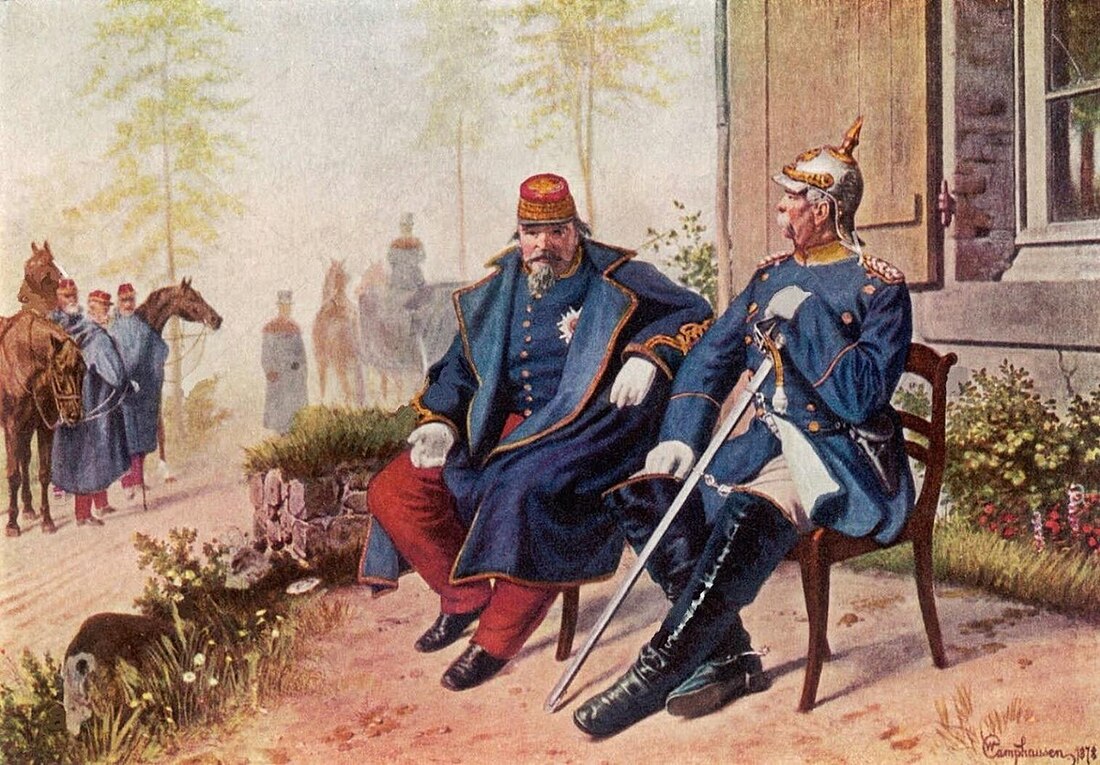 Peace talks eventually led to the Treaty of Frankfurt in May. The Treaty of Frankfurt had two notable clauses. The first was the requirement that France pay compensation of five billion gold francs to the victorious Germans. The other significant element of the Treaty of Frankfurt was the annexation of the French frontier territories of Alsace and Lorraine by the new German Empire. From the French point of view the annexation of the territories was a constant reminder of the humiliation of 1871. It would remain so until 1914 when the outbreak of the First World War gave the French army the opportunity to reclaim this honour with disastrous results. (Matu 7)

Even before Paris surrendered, the German princes had gathered in the Hall of Mirrors at Versailles to proclaim the foundation of the German Empire. (Below: The third version of the proclamation of Prussian king Wilhelm I as German Emperor at Versailles, by Anton von Werner). 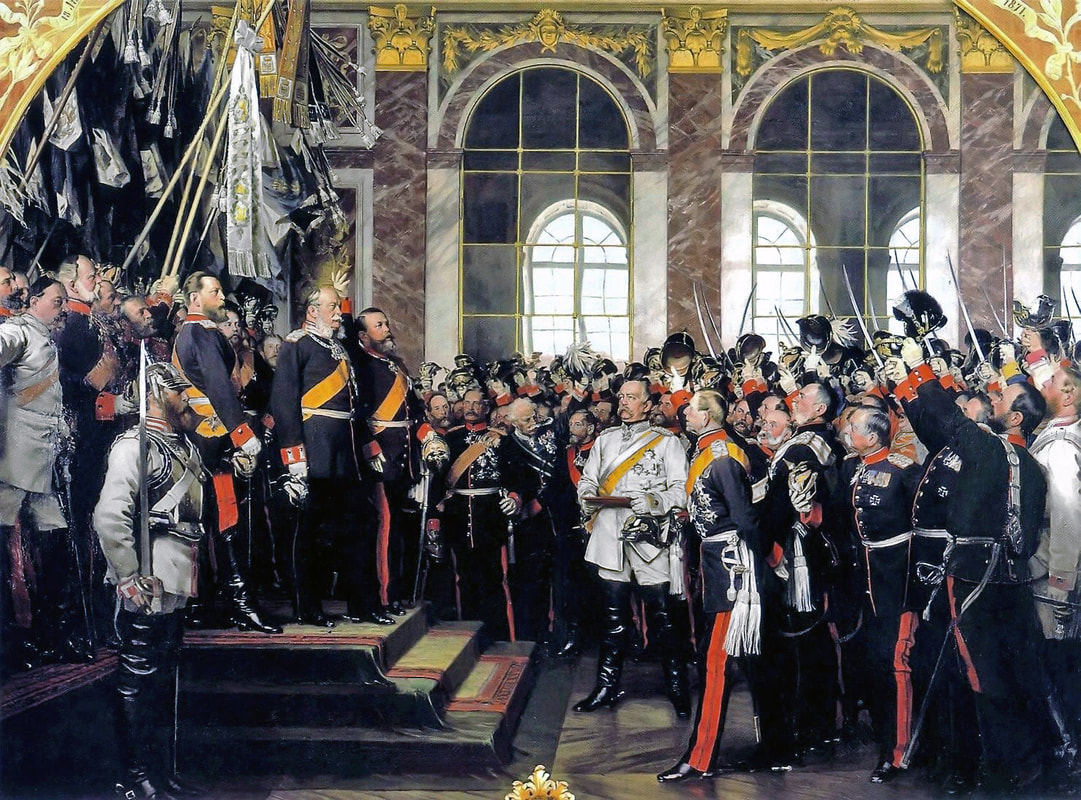 Bavaria and Württemberg were persuaded that they would be stronger inside a strong Germany  given the overwhelming economic, diplomatic and military power that the new Germany would possess. In addition, popular opinion within both states favoured joining the German union. The German Empire was basically an extension of the North German Confederation. Eighteen states, four kingdoms as well as the free cities of Hamburg, Bremen, and Lübeck were brought together in a federal structure. Alsace-Lorraine would be administered as a separate territory.
Activities

1. Why was Bismarck important to the success of German unification?
2. Summarise the main impact of the reforms of the Prussian army.
​3. Copy and complete the following table to show how war was central to German unification.

4. Did popular nationalism and industrial development play any role in German unification? Explain your answer.
5. In what sense had the creation of the German Empire destabilised Europe and made future war more likely?

There are not many films made about the wars of the 1860s. The lack of film footage and the fact that neither the USA or UK were involved means there has been less interest in the English speaking world.  AJP Taylor's BBC lecture for the 1970s is a fascinating illustration of what television used to be like, but he also happened to be the leading historian on the subject at that time. ​