Unit 2 - Classical Greece
Lesson 7 - Greek Cultural Legacy
The civilization of Ancient Greece has been immensely influential on all aspects of philosophy, science, and the arts. Along with the culture of the Roman Empire, Greek culture is the foundation of Western culture in general.

Philosophy is the study of fundamental problems concerning matters such as existence, knowledge, values, reason, mind, and language. The word ‘Philosophy’ comes from the Greek φιλοσοφία [philosophia], which literally means ‘love of wisdom’. When we begin to study philosophy today, we usually begin by studying the philosophy of ancient Greece. 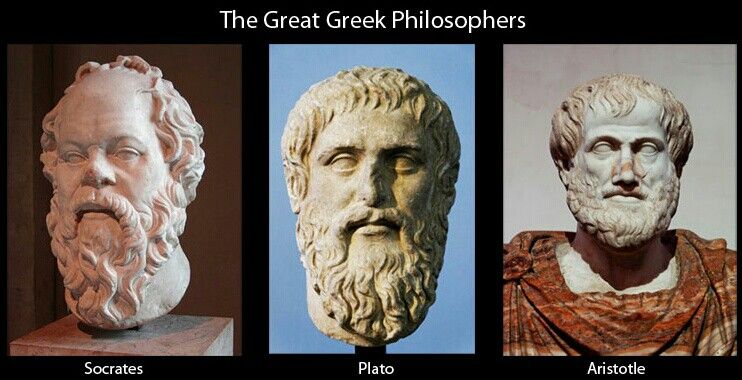 Socrates (469-399 B.C.) used to teach by asking his students questions and showing up weaknesses in their thinking. He always encouraged his students to think for themselves and not always to accept what other people said. ‘As for me’, he wrote, ‘all I know is that I know nothing’. They accused him of corrupting the minds of young people and sentenced him to death.

Plato (428-348 B.C.) was Socrates’ student. He taught in a place called the Academy. Plato's most famous book - called The Republic -described how an ideal state might be best governed. The Republic is usually one of the first books a philosophy student studies today. For Plato the ideal society is that in which only philosophers are fit to rule.

Aristotle (384– 322 BC) was a student of Plato and taught in a school called the Lyceum. He was also tutor to Alexander the Great. His writings cover many subjects, including physics, metaphysics, poetry, theatre, music, logic, rhetoric, politics, government, ethics, biology, and zoology.   He was the most influential ancient philosopher, many of his ideas went unchallenged for thousands of years.
Literature and Drama
Art and Architecture

The arts of ancient Greece have exercised an enormous influence on the culture of many countries, particularly in the areas of sculpture and architecture. In the West, the art of the Roman Empire was largely derived from Greek models. The Greeks developed three architectural systems, called orders, each with their own distinctive proportions and detailing. The Greek orders are: Doric, Ionic, and Corinthian. 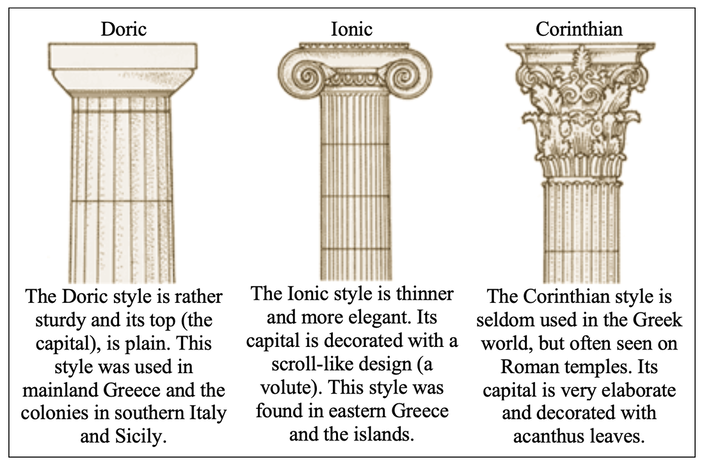 ​​In the Classical period for the first time we know the names of individual sculptors. Phidias (c. 480-430 BC) oversaw the design and building of the Parthenon. The greatest works of the Classical period, the Statue of Zeus at Olympia and the Statue of Athena are lost, although smaller copies still exist. Their size and magnificence prompted emperors to seize them in the Byzantine period, and both were removed to Constantinople, where they were later destroyed in fire.
Science and Technology
Activity

It is almost time for the end of unit test.  As part of your preparations, choose three individuals from classical Greece who have had a significant impact on this history of Western culture.  Each individual should be taken from a different area of culture, i.e. philosophy, literature and drama, art and architecture or science and technology. For each of these individuals write a brief explanation of why they important and/or what they achieved. Make sure to learn what you have written!

There will be two sections to the test.

Part 1 will be short answer questions that test your factual knowledge on all seven lessons.

Part 2 will require longer answers. How was the ancient Olympics both similar and different to today's Olympic Games? How was Athenian society organised? How did Athenian democracy work? How was Athenian democracy different to today's democracy?  How was Spartan society organised? Why was Sparta so good at war?  How did ancient Greeks hope to find out about the future?  What did they believe happened after death?  How has classical Greek culture been such an influence of Western civilisation?

Go to test
End of Unit 2 - film making assessment - Alexander the Great
In the north east of ancient Greece was a state named Macedonia (see map below). For long it was a poor and weak state but this began to change when Philip II became king of Macedonia in 359 BC. Philip was a determined ruler who built up his army and made Macedonia stronger. He conquered several nearby states and made them part of Macedonia. The remaining Greek states, alarmed by the growth of Macedonia, formed the Hellenic League to try to stop Philip, but they were too late. 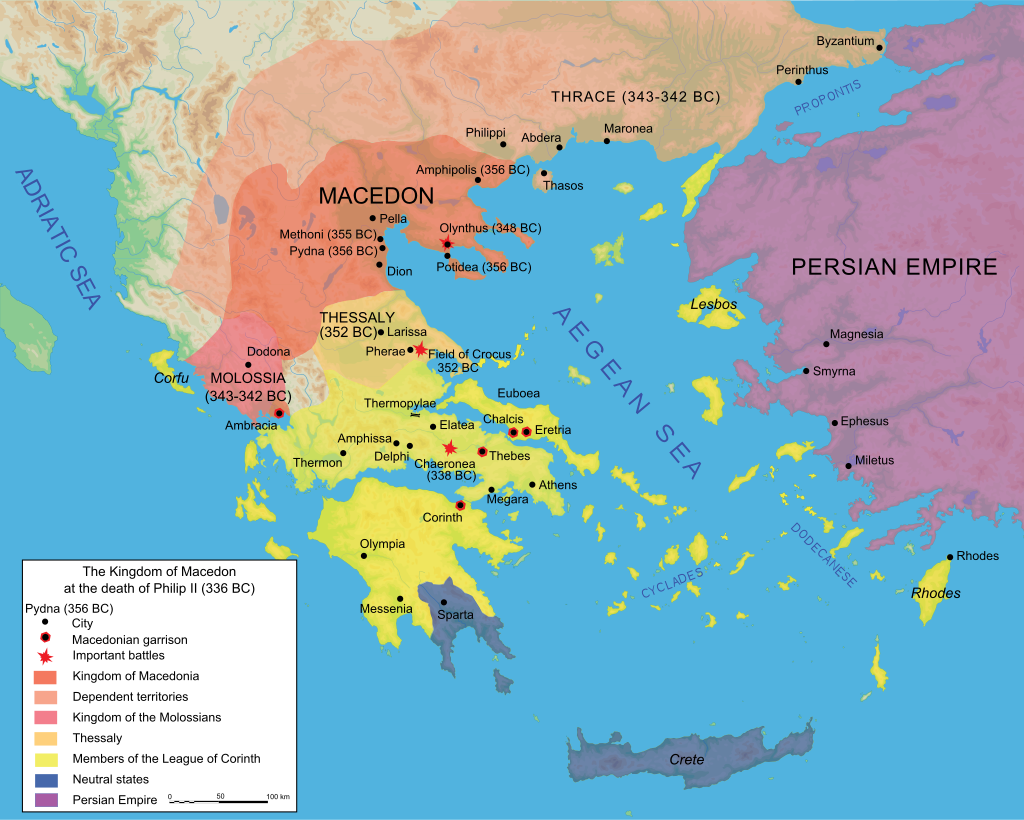 By 338 BC, Philip had defeated the Hellenic League and become the hegemon (leader) of all Greece. Philip decided that the best way to unite all Greeks under his rule was to make war on an enemy whom they all hated. That enemy was Persia and Philip planned to draw together a great army of Greeks to attack the Persian Empire.

Philip never carried out these plans. One day in 337BC, he was stabbed to death by one of his own bodyguards. Nobody knows who, if anyone, planned the assassination of Philip, but the person to benefit most from it was certainly his son Alexander. Born in Pella in 356 BC, Alexander received an education under the tutorship of famed philosopher Aristotle. On the same day as his father died, Alexander was made King of Macedonia and hegemon of all the Greek states. The first thing Alexander did was to make sure that all Greeks obeyed him as their king.


An example was made of Thebes. When the city of Thebes was captured by Alexander's forces, its buildings were flattened. More than five thousand of its people were slaughtered and the rest sold as slaves. After that, there were no more Greek rebellions against Alexander. As soon as Alexander had secured his position as undisputed leader of all Greece, he set about his life's greatest ambition. This was to conquer the mighty Persian Empire which itself had in the past tried to conquer Greece.

In 334 BC, Alexander led an army of 50,000 men into Asia Minor and invaded the Persian Empire. Against overwhelming odds, he led his army to victories across the Persian territories of Asia Minor, Syria and Egypt without suffering a single defeat. His greatest victory was at the Battle of Gaugamela, in what is now northern Iraq, in 331 BC. The young king of Macedonia, leader of the Greeks, overlord of Asia Minor and pharaoh of Egypt became 'great king' of Persia at the age of 25. 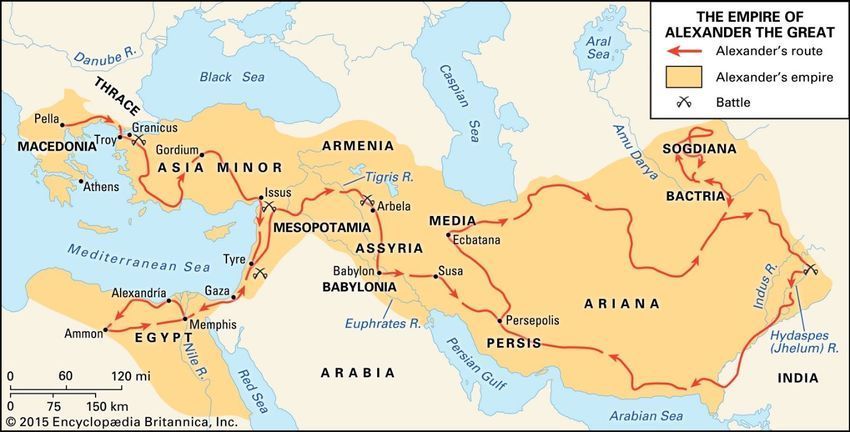 Over the next eight years, as king, commander, politician, scholar and explorer, Alexander led his army a further 11,000 miles, founding over 70 cities (including Alexandria in Egypt - see map below) and creating an empire that stretched across three continents and covered around two million square miles. The entire area from Greece in the west, north to the Danube, south into Egypt and as far to the east as the Indian Punjab, was linked together in a vast international network of trade and commerce. This was united by a common Greek language and culture, while the king himself adopted foreign customs in order to rule his millions of ethnically diverse subjects. On either 10 or 11 June 323 BC, Alexander died in the palace of Nebuchadnezzar II, in Babylon at the age of 32. The exact cause of his death is unknown, although it seems to have been a result of natural causes, perhaps typhoid or malaria.
After Alexander's death, his empire was divided among his generals, who fought among themselves for territory. The great empire of Alexander became steadily weaker. Many years later, Rome began to emerge as a growing military power. The Roman Empire gradually and slowly began to conquer Greek territory. The last part of Alexander's empire to be conquered was Egypt. It became Roman territory when Queen Cleopatra was defeated by the Romans in 31 BC. Greek language and culture lived on in many of the territories conquered by Alexander. Many aspects of Greek art, architecture and learning were copied by the conquering Romans. Through the Roman Empire, it was passed on to influence greatly the cultural development of Europe.

Produce a short film (2-3 minutes)  of the life of Alexander the Great. It must be a balanced account that includes negative and positive points about him.