Lesson 3 - The economic impact of the Industrial Revolution - Industry
Begin this lesson by making a copy of the diagram in the activities section.
​Iron and steel

Iron and then steel were the materials of the Industrial Revolution. Their production on a large scale made engineering, transport and industrial change possible. The main changes in the iron and steel industries between 1750 and 1900 were in the scale of production.
In 1709 Abraham Darby introduced coal based smelting (coke) which meant that the iron industry no longer depended on charcoal.  To demonstrate their expertise the Darby family made the world's first Iron Bridge in ​1786.
​Steam power

The early factories were powered by waterwheels and were located next to rivers. Gradually steam replaced water as the main source of power in the Industrial Revolution. The process of developing a steam engine capable of meeting the needs of industry took decades. The first steam engine was developed to pump water out of the bottom of coal mines (see below 1712).  By 1781 James Watt had managed to design a steam engine that could turn a wheel. The importance of Watt’s engine was that he had linked steam power to motion. However, his invention did not mean that every factory quickly changed to steam power. In 1800 there were only around 500 of Watt’s machines in use partly because Boulton and Watt controlled the patent. (see film below right) However, by 1850 steam power was far more widespread, especially in the cotton industry. It also had a crucial role in the development of the railways because steam was the power used to drive the engines. ​​
​Textiles

In 1750 most of the textile process took place in the home in the ‘Domestic System’. The workers would spin thread or weave cloth and then sell their produce to merchants. (See the digarm below) The benefit of this system was that the workers could work from home and control when and how they worked. For example, the tradition of not working on a Monday - 'St Monday' - was a consequence of this.  ​ 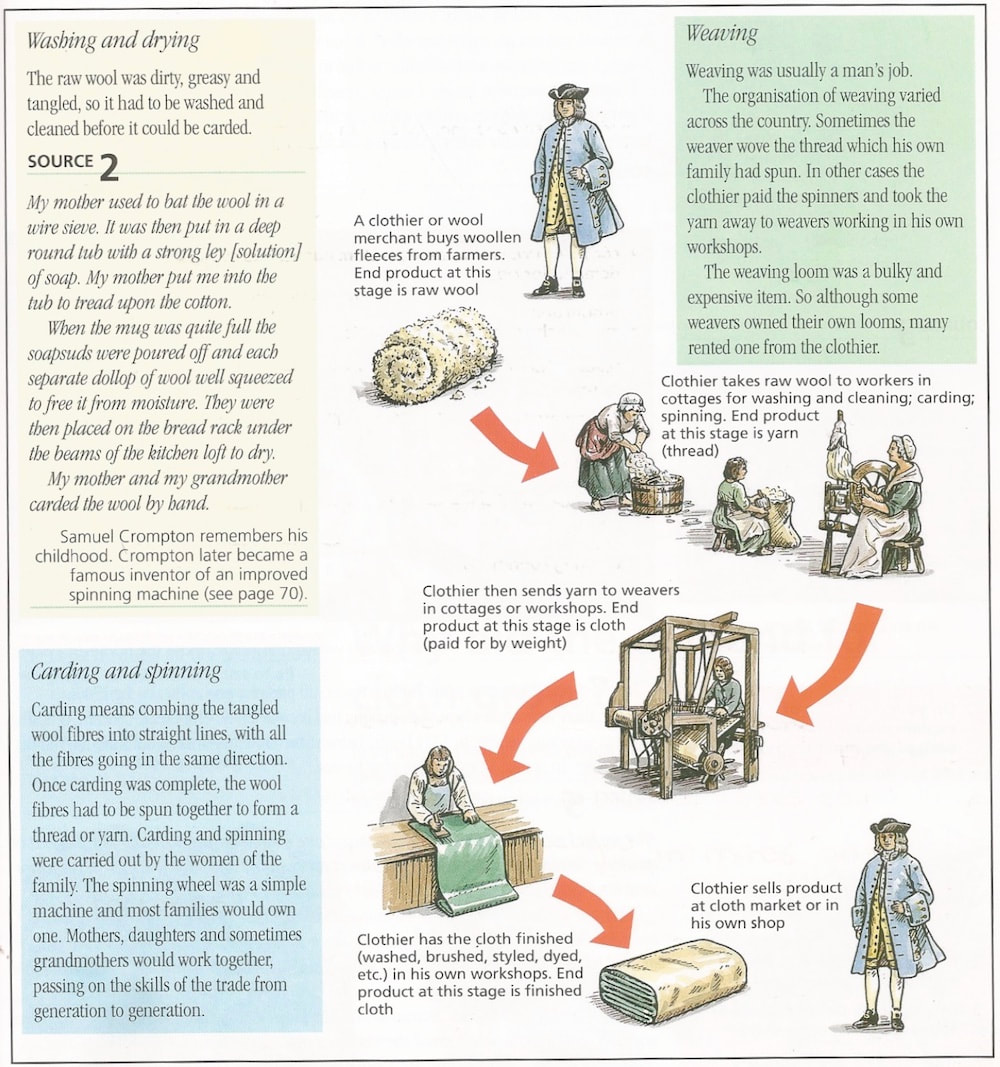 Diagram from Ben Walsh - British Social and Economic History 1997.
The disadvantage was that cloth was expensive because the manufacturing process required a lot of labour. The change from the domestic system to the factory system was the result of the work of a number of inventors which were outlined in the first lesson.
The result of these inventions was to make cotton easier to produce and with less labour, so the price of cotton goods fell. This in turn meant that demand went up, so more cotton was produced. Before improvements in steam engine technology, most of the new textiles factories such as Richard Arkwright's mill at Cromford in Derbyshire (below built in 1771) relied on water power.
The move towards larger cotton factories was partly the result of a shift from water to steam power. As a result of this change factories were moved from near sources of water power into towns and cities. The innovations in machinery were more suitable for use in the cotton industry than in any other. By 1850 it was cotton that had become the first industry to move to a factory system on a wide scale. ​
Activity

If I were you, I'd begin by enjoying the slightly mad Mark Williams about the centrality of steam power in the short films above. How often are steam engines mentioned?  Before he was Arthur Weasley in Harry Potter and before going on to study at Oxford University, he won a school history award and requested as a prize a book about Industrial Archaeology. This is not simply an actor performing a script to camera. See more about him. ​
Complete this table of industrial innovations. You can either copy to complete in Notability or make your own. 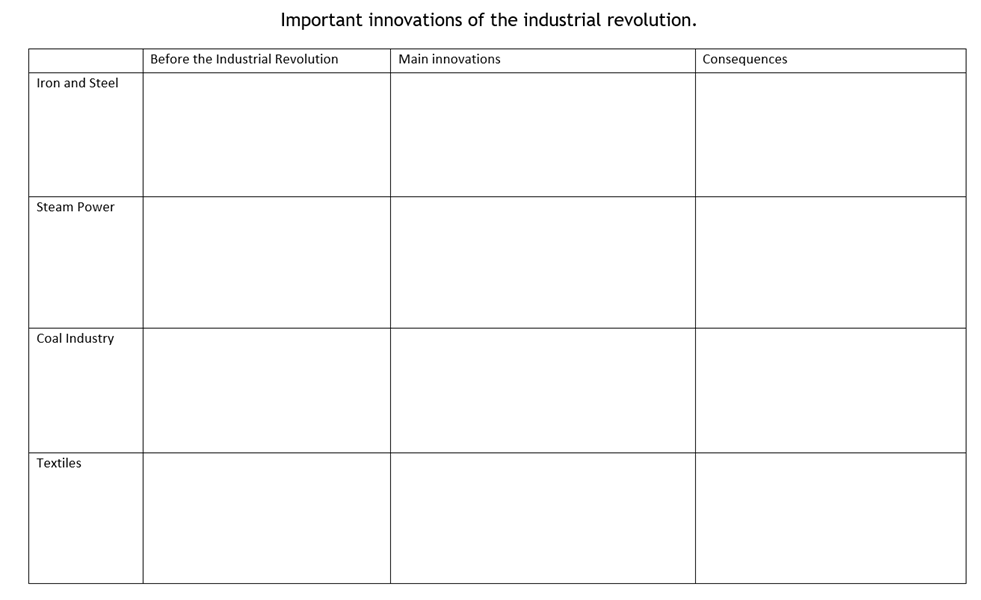