Unit 4 - Roman Empire
Lesson 3 – Pompeii
Pompeii was a fashionable town within sight of an attractive flat-topped mountain then called Mons Vesbius. Educated people believed that this mountain was a volcanic one. But it was, they felt sure, an extinct volcano, since it had never erupted in the lifetime of the Roman Republic or Empire. Throughout much of August in the year 79 AD, the people of Pompeii enjoyed prosperity and fine summer weather. What the citizens of Pompeii did not know was that Mons Vesbius was not extinct but dormant this means that, although it had not erupted for a very long time, it was liable to erupt again.

The twenty fourth day of August began quite normally, with the people of Pompeii going about their usual business.  Then, early in the afternoon, a terrible roar was heard throughout the city. Mons Vesbius (Vesuvius) was erupting. The eruption was so bad that one side of the old volcanic mountain burst open suddenly. A dark cloud rose from the mountain, showering down hot ashes, stones and pieces of lava. All light disappeared behind the huge cloud of ashes and it stayed dark as night for three days. The ashes fell like dense snow, making it hard to breathe or even to move. Then a heavy cloud of poisonous sulphur fumes came tumbling down the mountain. This deadly gas seeped through every part of Pompeii, killing those who sought shelter indoors. Many of those who tried to escape by running away were killed by the falling hot stones and lava fragments. From one side of the mountain came a great flood of lava and hot volcanic mud. For three long days it poured out of the open wound of the mountain. Then, after the third day, the sun began to shine again on a destroyed landscape. Pompeii had practically disappeared beneath layers of volcanic material.
Pompeii Today 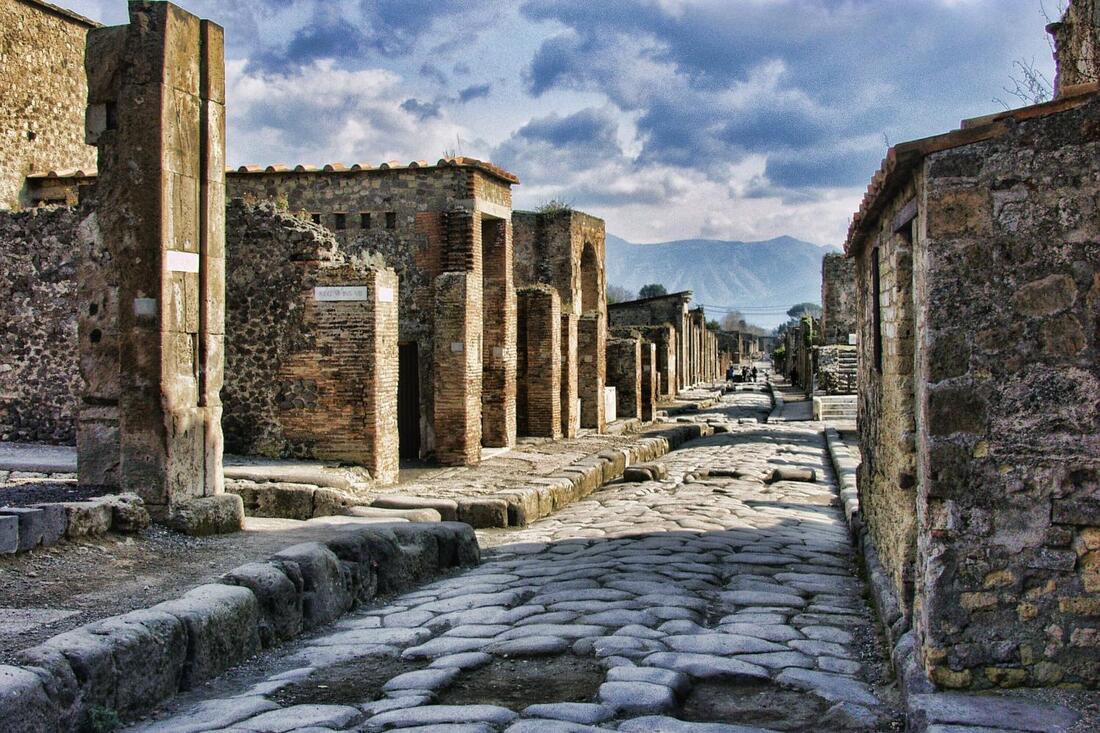 For almost 1800 years Pompeii lay buried and forgotten. Then, in 1860, the ancient city was rediscovered by a group of archaeologists and workmen led by a famous Italian architect named Fiorelli. Slowly and carefully Fiorelli and his workers began to uncover the almost perfect remains of the Roman town. To this day you can visit the ruins of Pompeii and see it as it had been in Roman times. The disaster of 79 AD had the effect of preserving the city up to the present time.

When such victims died, their bodies were covered in fine ash which hardened gradually around the bodies. The bodies rotted slowly, but left their exact imprints in the hardened ash. Fiorelli and his archaeologists probed the ground for the hollow spaces where the dead bodies once existed. Then they pumped a type of liquid plaster into the spaces. When the plaster hardened, the archaeologists carefully removed the volcanic ash around it to reveal perfect plaster casts of those who died in Pompeii.
The objects buried beneath Pompeii were remarkably well-preserved for almost two thousand years. The lack of air and moisture allowed for the objects to remain underground with little to no deterioration, which meant that, once excavated, the site had a wealth of sources and evidence for analysis, giving remarkable detail into the lives of the Pompeiians. Unfortunately, once exposed, Pompeii has been subject to both natural and man-made forces which have rapidly increased their rate of deterioration. Today, Pompeii is a UNESCO World Heritage Site and one of the most popular tourist attractions of Italy, with approximately 2,500,000 visitors every year.