Lesson 8 - Switzerland
This is the last lesson on the Industrial Revolution, which means in addition to completing the activities for this topic you also need to revise for the end of unit test which will take place next lesson. ​
Textile industry

Eastern Switzerland had been an important centre for textile (cloth) production since the end of the middle ages. In St. Gallen the ‘domestic system’ had been introduced in the 15th century. There was already a sophisticated division of labour with the ‘putting-out system’ where the work of skilled handloom weavers was supplied and distributed by a merchant capitalist class.

The production by machines in Switzerland began in 1801 in St. Gallen with the import of the latest machines from Great Britain. In Switzerland, hydraulic power was used instead of steam-engines because in the mountains and hills there is relatively easy access to waterpower. As early as 1814 the machines had replaced textile production by hand completely. (Below one of the biggest spinning factories, La filature du Hard at Winterthour in about 1820). 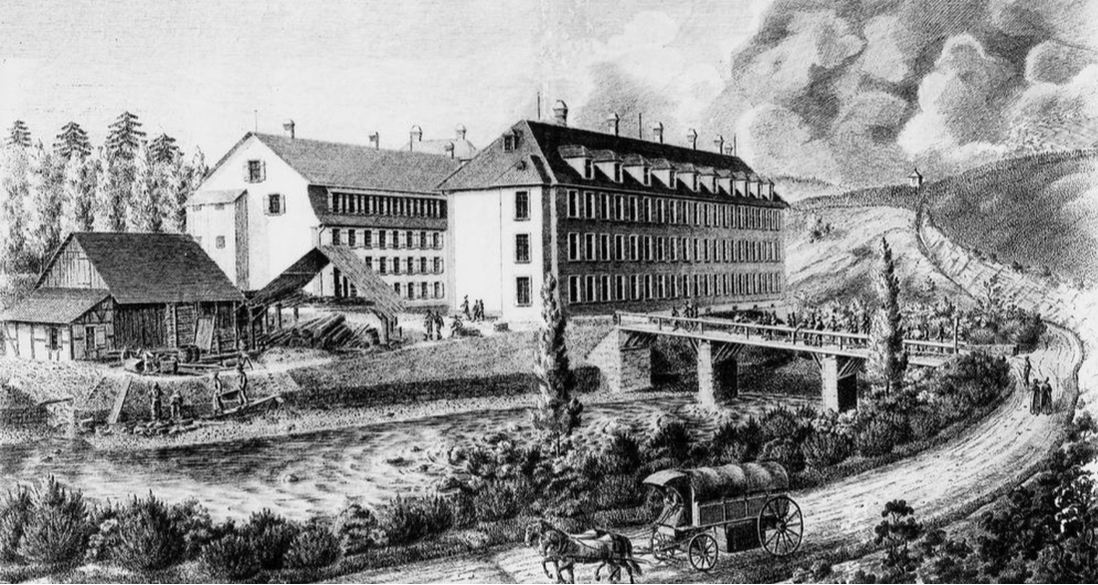 A second area of industrial innovation came with the development of machine manufacture. As we saw in a previous unit, France’s Continental Blockade attempted to isolate Britain from European trade during the Napoleonic Wars. In Switzerland, this meant that British industrial machinery could not be imported. This provided the incentive for Swiss textile manufactures to begin producing their own machines. 1805 Escher, Wyss & Co. (Zurich) and 1810 Johann Jacob Rieter & Co. (Winterthur) were amongst the first engineering companies to establish what became a rich industrial tradition in the north-east of Switzerland.
Chemical and food industries

The first chemical factory in Switzerland was founded by Daniel Frey at Aarau in 1804. The industry started to become important from the 1850s.  In 1859 Alexandre Clavel, Louis Durand and Etienne Marnas came from France to Basel to produce synthetic colors. From 1884 their company was known as Chemische Industrie Basel (CIBA). Basel is still today a world centre for the chemical and pharmaceutical industry.
Chocolate was produced in Switzerland as early as 1803 by hand-crafted methods. In 1819 François-Louis Cailler founded his chocolate factory at Vevey. Advertising by Philippe Suchard (Neuchâtel 1826) made Swiss Chocolate known to the world. Daniel Peter (from Vevey) invented milk chocolate in 1875 and Rodolphe Lindt developed a new method to make chocolate melt on the tongue (not a sandy texture) in 1879. ​Industrialization created a market for products that could be prepared and eaten quickly, sometimes even during work at the factories. Maggi and Knorr were Swiss companies that created instant soups in cubes or bags. Henri Nestlé invented a food for babies based on milk, sweeteners and flour in 1866. His factory at Vevey became in 1905 became one of the first multinational food industries.
Railways

The development of the railways in Switzerland was relatively late. In the 1840s, individual cantons still imposed tariffs and tolls on people and goods that crossed their frontiers. The new federal constitution of 1848 enabled the planning and financing of railways and soon after there was rapid expansion with more than 1000km of line built in a 10-year period. By the time the federal government took over (nationalised) the railways in 1898, Switzerland had one of the densest railway networks in the world.
The development of trade unions and political parties was a gradual process and as in Britain it was opposed by employers who feared a loss of their competitivity. Also, as in Britain, the first responses of the working classes to the industrial revolution could be violent and targeted the machinery that threatened their jobs. The most famous incident took place in Uster, near Zurich in 1832. (See image below) As in the north of industrial England, qualified handloom weavers saw their newly installed machinery forcing down the level of their wages. The coordinated attack on the Corrodi & Pfister spinning mill resulted in the destruction of the factory, 75 arrests and sentences of up to 24 years in prison with hard labour for the organisers. 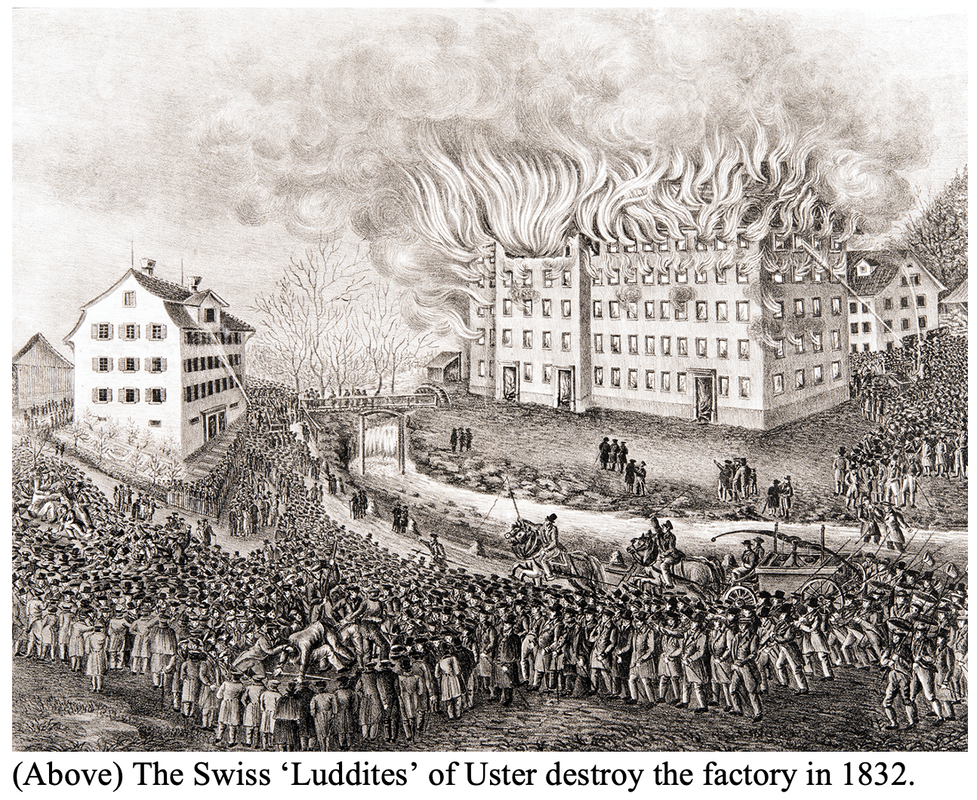 Although the first trade unions appeared as early in 1838, it was not until the 1870s with the foundation of l'Union syndicale suisse (USS) that real improvements in the conditions of work were achieved. The 1877 Factory Act restricted the length of the working day throughout Switzerland and safety measures were compulsorily introduced in the most dangerous industries. Workers wages increased four-fold in the second half of the 19th century, although health insurance to cover accidents at work was not introduced until 1912 and even then, it was not compulsory.

Perhaps the key development in the history of the Swiss working class was the foundation of the Social Democratic Party on 21 October 1888. The SP was a socialist party committed to winning political power as a means of improving the lives of workers. But as in Britain, it wasn’t until after the first world war that the SP became a serious political force.
Activities

Why not visit a museum on Swiss industrial heritage?​