Unit 4 - Roman Empire
Lesson 4 – The Rise and Fall of the Roman Empire
​Hundreds of years of warfare and conquest resulted in the Roman Empire growing larger and larger. By the time of the death of the Emperor Trajan in AD 117, this huge Empire was at its largest. By then it stretched from the modern borders of England and Scotland in the north to the edge of the Sahara desert in the south. From west to east it lay between the Atlantic Ocean and modern Syria. The map below shows the fullest extent of the Roman Empire by A.D. 117. 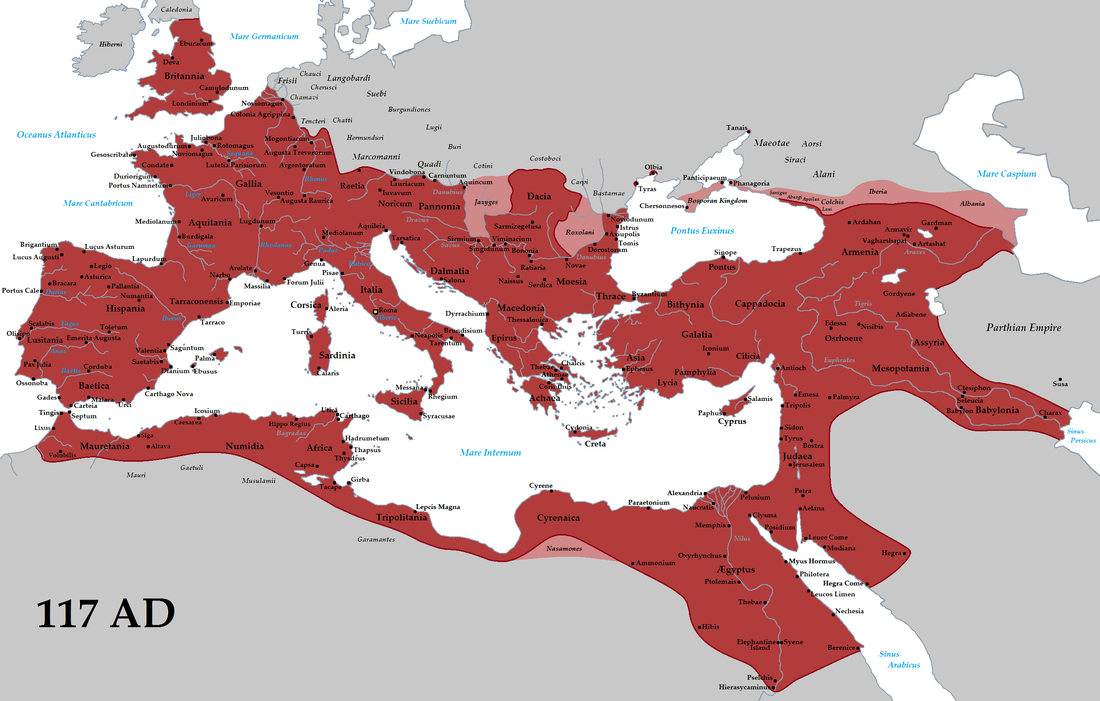 Historians like to group ideas together under big headings. The reasons for the growth in the Roman Empire can be divided into political, economic, social and military. Read again through the text above and find examples of reasons which fit under each of the four big headings.
Why the Empire declined (and more big headings)
Reaching the end.
​By the year AD 400, the empire was split into a western empire ruled from Rome and an eastern empire ruled from Constantinople. In AD 455 an army of Vandals sailed from North Africa, invaded Italy and destroyed Rome. Famine followed and the city's population - once more than a million - fell to less than 20,000 people. The end was not long coming. In AD 476, the last Emperor of the West was overthrown by a German leader. The German's name was Odoacer. The last emperor's name was Romulus Augustulus. The Western Empire was gone forever.

​While the western empire declined, the eastern empire became richer and survived for almost a thousand years. After the fall of the West, the eastern empire became known as the Byzantine Empire. Its capital city, Constantinople, became a great centre of trade, art and culture. As the centuries passed, the Byzantine Empire gradually lost its old links with Rome. For example, Greek replaced Latin as its most important language. It was not until the eighth century AD that the Byzantine Empire began slowly to lose ground to the followers of a new religion called Islam. Members of this religion, known as Muslims, followed the teachings of the prophet Mohammed. Very slowly the empire began to crumble under Muslim pressure. Finally in AD 1453, Constantinople was captured by a Muslim army.